A fish fry, concert and children’s activities fair took place Thursday afternoon just east of UAHT’s Hempstead Hall, with the Hope Lions Club frying the fish and the band Bois D’Arc Bottom Bunch playing and singing the tunes while students from the school’s nursing program saw to the fair.

The fish fry began serving around 4:45 with Lions Club volunteers becoming a kind of assembly line of chicken and fish frying. The Mississippi- and Louisiana-raised catfish filets would be cut into long pieces, dipped in the club’s secret recipe meal mix and then plunged into several deep fryers.

Chicken breast pieces were dipped in a secret batter and then fried. Two pieces of fish and two chicken fingers would then be placed in Styrofoam boxes with fries, hushpuppies and coleslaw and then served to those who had paid the $15 for tickets.

Lions Club members Jack Griffin, Claudia Griffin, Don Freel, Ed Flagg and about a dozen others were involved in producing the main dishes.

As meals were served and children took part in Jenga, water color painting and other activities with the nursing students, the Bois D’Arc Bottom Bunch played country and folk songs. Before starting “Blue Eyes Crying in the Rain,” vocalist Megan Lance explained that Russell Turner, one of the instrumentalists had said of the song, “I can eat fish to that.”

UAHT Executive Director of Advancement and the UAHT Foundation Anna Powell was the lead organizer of the event. She reported that about $10,000 was raised that Thursday for scholarships that will go to UAHT enrollees who are nontraditional students two years removed from attending any school and do not yet have an associates degree.

Powell said that without the Lions Club’s fish and chicken frying assistance the event could never have taken place.

This was the 29th year of a springtime fish fry taking place at the UAHT location, Powell said. But 2022’s was the first year since 2019 that it could take place outdoors in front of the Hempstead Hall amphitheater. 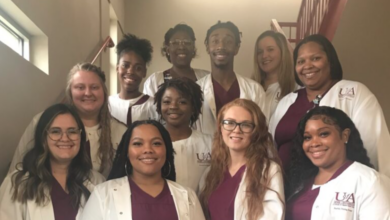