By Rick Kennedy, managing editor
In the middle of a five-state swing, the performers of “Masters of Soul” were preparing for a show in Ferriday, Louisiana tonight before arriving in Hope for Saturday night’s performance at Hempstead Hall.
Tour manager John Hodges, who also portrays classic soul singer Barry White in the cast, said Thursday morning “It has been a great tour; lots of energy and good spirits, it has been a lot of fun.”
Traveling in a caravan and trailer full of costumes, Hodges said audiences have been receptive and fondly remember the Motown sound, which generally marked an era of music, pre-rap, between 1964 and 1980.
Hodges said that a wide cross-section of audiences have enjoyed the music and the tour, which also features much of the costumes and dance performances from those acts.
“The audiences have been receptive, and the people at the locations have been real nice and very warm. These are good songs with good messages and lyrics people know and can sing along to,” he said.
Especially fitting this year, Hodges said the “Masters of Soul” features an Aretha Franklin tribute, featuring arguably her most famous song, “Respect.”
“We’ve also done her songs ‘Rock Steady’ and ‘Say a Little Prayer’ during the tour, too” Hodges said.
Franklin, who passed away in August, was well-known and revered worldwide as a singer, songwriter, and Civil Rights activist, and performed some of the most influential songs in pop culture history.
Based out of Virginia Beach, Virginia, Hodges is leader of a veteran ten-person ensemble that includes three male vocalists and three female vocalists backed by a four-piece band.
“Yeah, we’re a long way from home, but it has been a great touring experience,” he said, “It is always good to be out on the road. We’ve been doing this professionally for years, but it never gets old; we grew up on this music and these artists.”
Over the years, different cast members have come and gone, although a core group, including Hodges, has been together since the mid-1970s. With the cast changes, however, it has enabled to group to bring in and phase out new acts.
“We had a ‘Stevie Wonder’ at one time; now we’ve got a ‘Marvin Gaye’ but we’ve been able to keep the shows fresh,” Hodges said.
In addition to Aretha Franklin, the current list of artists recreated in “Masters of Soul” reads like a who’s who of the genre: the Supremes, the Four Tops, the Temptations, Donna Summer, Al Green, Tina Turner, Smokey Robinson among others.
“Yeah, we’ve got that trailer stacked full of costumes,” Hodges said.
In the current “Masters of Soul” tour, Hodges said that people from all walks of life, colors and ages have attended the shows.
“I think that shows what good music can do; songs about love, or songs with harmony are ageless and boundless. People, young and old, know this music and can sing along. It is very different than some of the music of today,” Hodges said.
Hempstead Hall Director Dolly Henley said, “We are so fortunate to have locked in the Masters of Soul for this year’s Performing Arts Series. Just a few years ago, Hempstead Hall hosted The Temptations and The Spinners and both concerts were well attended. The Motown genre is popular in our region and I believe we will have a strong attendance for the show on October 27.”
Tickets are $25 mid-level, $35 and $50 lower level, for reserved seating. Student tickets are $15.00 Tickets can be purchased at hempsteadhall.com or by calling 870-722-8565. 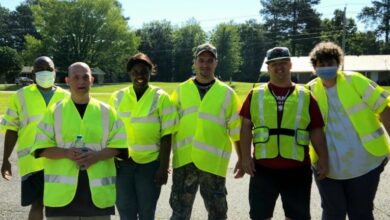