FAYETTEVILLE — On offense, no position has more questions surrounding it entering preseason drills on Friday.

Gone are Treylon Burks, Tyson Morris and De’Vion Warren. Those three combined to catch 105 passes for 1,684 yards and 13 touchdowns. Burks, of course, had the majority of that with 66 receptions for 1,104 yards and 11 touchdowns. He went on to be a first-round pick of the Tennessee Titans.

Only four wide receivers who return have actually caught a pass. It would be five with Trey Knox who had 20 catches for 141 yards and a touchdown, but he is a full-time tight end now. He spent the majority of his time at tight end last season as well and it turned out to be an outstanding move for all involved.

Warren Thompson is easily the leading returning wide receiver catching 19 passes for 304 yards and two touchdowns in 2021. The former Florida State four-star seemed to thrive with the move to Arkansas. If he can eliminate some dropped passes that haunted him last fall, he could be in line for a very good season.

The wide receiver room could get a very good addition with quarterback Malik Hornsby, who has outstanding speed and hands, possibly playing there this fall according to Sam Pittman.

“Well, I tell you this,” Pittman said. “We’re formatting our practice so Malik can do both. In the past we’ve gone ones and freshmen, then 2s and 3s on the opposite field. But this year we’re going to go 1s and 2s and that way we can keep Malik on that field so we can practice him at wide receiver. I’ll just tell you this: I’ve told him that we need him on the field. He has to earn the right to get on the field but we need him on the field. We think he’s an excellent football player. So we are obviously going to give him the … there’s a fine line … give him the opportunity to win the job but at the same time give him the opportunity to win the wide receivers spot too. So we’ve got a plan for it. I hope it works and I feel like it will.”

“What afforded us to do this in the first place was Cade Fortin ,” Pittman said. “I think we all have a lot of confidence in him. So that kind of afforded us … you know if you don’t have a 3 that’s ready then you better not move your No. 2 quarterback out to wide receiver. But with Fortin and how he came on this spring we felt like we were able to do this. Honestly the first time Fortin took us down in a two-minute situation, after that day was when we really started thinking about Malik playing wide receiver at that point.”

Fortin played at South Florida in 2021 and saw action in five games including a pair of starts. He completed 12 passes for 91 yards against Florida. Coming out of high school Fortin was a four-star recruit, ESPN rated him the No. 17 quarterback in the nation, and he started his career at North Carolina.

Whether it’s Jefferson, Hornsby or Fortin throwing passes Arkansas has to find other wide receivers to get the job done.

Pittman is counting on Oklahoma transfer Jadon Haselwood and former Georgia and Toledo wide receiver Matt Landers to be in the mix. Haselwood led the Sooners with 39 receptions for six touchdowns in 2021. Those catches went for 399 yards. Landers had 20 catches for 514 yards and five touchdowns.

“Isaiah has very good ball skills, can separate,” Pittman said. “He’s exactly what we thought he would be. Mbake is a big, long, physical guy that can run. We like him as well. We think we hit on all three of those guys there.”

Landers started his career at Georgia and played one season at Toledo. In Pittman’s first game at Arkansas, Landers caught two passes for the Bulldogs. Pittman remembered Landers from his freshman year in Pittman’s last season with the Bulldogs.

“Matt is a guy I knew from Georgia when I was there,” Pittman said. “He certainly looks different than he did when he was a freshman at Georgia. He’s big, physical. He can run, now. I mean, he can fly. I think what he’s done is he’s made us better. He’s made Warren Thompson better. He’s made Ketron Jackson better, and that’s because of the heat his presence puts on them. So I think on the outside we’re going to be in pretty good shape. I really do. But I think he’s going to help us, and I think he’ll help us a lot.”

Sategna is a true freshman from Fayetteville High School who didn’t report until late May, early June. As a senior, Sategna caught 100 passes for 1,908 yards and 17 touchdowns while also rushing four times for 147 yards and three touchdowns.

“He’s really smart, so he learns fast,” Pittman said. “That’s the one thing that NCAA has allowed us to do is have meetings, so that’s helped us. In the past, there wasn’t as much meeting time. Now, we’re able to meet, so he’s picking it up fast. He picks up the offense fast. The number one thing that keeps young kids off the field is they don’t know the offense. They don’t know the defense. So therefore, they’re thinking and you’re not seeing their full athletic ability. Again, he has great ball skills, and he can separate on a route. And I think those are things you saw in high school. And he’s fast. Those things you saw in high school, but I knew he was a smart guy. I knew he was a smart kid, but he really picked up the offense fast.”

Arkansas will begin practices on Friday. 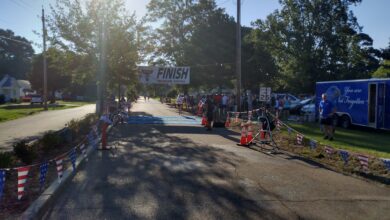