By Otis Kirk (Nate Allen Sports Service)
According to FootballScoop.com, Arkansas is hiring Auburn’s Kenny Ingram to coach defensive tackles.
Ingram was the director of player relations at Auburn. He last held an on-field coaching job when he had the defensive tackles at the University of Cincinnati during the 2015 and 2016 seasons. He helped the 2015 Bearcats to a berth in the Hawaii Bowl.
Ingram has extensive ties to Memphis, Tenn., an area that Chad Morris has pledged to recruit hard. He played at Memphis Whitehaven. He also was head coach at Memphis Melrose from 2002-04 and posted a 37-4 record. That came after he served as assistant head coach and defensive coordinator at Melrose from 2001-02. He helped lead Melrose to one appearance in the state finals and twice in the semifinals.
A three-time Regional Coach of the Year at Melrose. He was named the Commercial Appeal’s 2004 Coach of the Year for Metro Memphis. He left Melrose to coach the defensive line at Tennessee State in 2005.
Ingram then was hired at the University of Memphis from 2006-09 coaching the linebackers. He added defensive coordinator to his title in 2009. He was part of bowl games two years at Memphis.
He coached the defensive line at Arkansas State under Gus Malzahn in 2012. He then followed Malzahn to Auburn where he was director of player relations in 2013-14.
Ingram was a four-year letterman at Arkansas State from 1989-92. He was coached at Arkansas State in 1989 by Steve Caldwell, who now coaches defensive ends at Arkansas.
He will replace John Scott Jr. who left last month to accept an assistant coach position at South Carolina.
Under Morris, Arkansas has signed three players from Memphis and Ingram will likely give them an even bigger presence in the city. The Hogs have signed Memphis Christian Brothers offensive lineman Ryan Winkel in 2018 and then added wide receiver Shamar Nash and defensive lineman Eric Gregory in 2019. Nash and Gregory signed with the Hogs out of Bradenton (Fla.) IMG Academy, but both were originally from Memphis Central High School.

A World of Difference 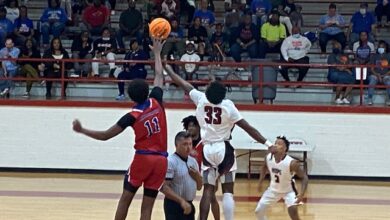