By Rick Kennedy, managing editor
Still in business to finish out its business, 11-members of the Hempstead County Bicentennial Commission met in a one-hour session Monday evening and heard of a solid financial statement with $15,107.80 in the black as the initial wave of revenues and bills were paid in the aftermath of the County’s 200th birthday party last December.
As presented by Finance Chair Dennis Ramsey, the Bicentennial Commission’s Income Statement showed $27,056.00 in revenues and support against $11,948.20 expenses to date.
Ramsey noted that there was an additional $1,000 sponsorship still outstanding.
The budget item that got the most attention — and discussion — was a $1,100 payment made to Smith Monument, Co., which Ramsey announced had been paid in full, to which Bicentennial Co-Chair Richard Read expressed dismay.
Later in the meeting, Read had voiced various concerns ranging from costs to paying $1,100 for “something faulty” and “erroneous” referring to a placard-style monument that was ordered by a Commission member in October and showed up at Farmer’s Bank, the site of the new Hempstead County Courthouse in December.
The placard has since been placed outside in front of Farmer’s Bank, on two wooden two-by-fours, propped in front of the building’s flag pole.
Reed maintained that the original cost was to be around $600, although several Commission members, including Josh Williams, who chaired Monday’s meeting, said that they recalled being told it could be up to $1,000 in October and authorized such.
Reed also said the engraving on the placard was both unauthorized and contained wrong information, which in his mind, needed to be accounted for. But, the rest of the Commission seemed puzzled by Reed’s complaints, and Ramsey eventually got up from the table and walked out.
And as for any “mistakes” in the engraving — whether authorized or not — the Commission as a whole seemed content to have the inscription “corrected” in one way or another, even suggesting the current placard could be returned to Smith Monument, Co. for an exchange or redo. Keenan Williams, for example, said it could be flipped over and re-engraved on the other side. Read himself said the current engraving could be filed off, but he still appeared upset over lack of accountability.
Cherry Stewart, the only current member of the Hempstead Quorum Court in attendance Monday, said the previous Judge, presumedly meaning Haskell Morse, who was originally charged by the Commission in October with the placard order, “did the best he could” and she continued saying “the new Judge will continue the good work.”
A motion was eventually made to refer the matter the Quorum Court and they can decide what can be put on it.
Read also said he will be at Quorum Court’s February 21 meeting to discuss the disposition of the time capsule at the request of current County Judge Jerry Crane. Read said he will present the options for the time capsule, either it being buried near the pavilion or placement within an interior wall inside the new courthouse.
In other financial news, the Commission agreed to continue selling surplus Bicentennial t-shirts at their current reduced price point of $10 each through the Chamber of Commerce office.
The Commission also agreed to obtain special marker signs for each of the Hempstead County towns and communities. The proposed signage would be on a cast aluminum plaque with the official Bicentennial logo, community name, and short history of that individual community. Josh Williams said the total costs would be $19,226.70, but the Hempstead County Historical Society will contribute $5,000 towards the signs which means the total costs should be covered. All the communities, including Fulton, McNab, Saratoga, Columbus, Bingen, McCaskill, Blevins, Spring Hill, Patmos, DeAnn, Oakhaven, Ozan, Guernsey, Washington, and Hope would get the signage. 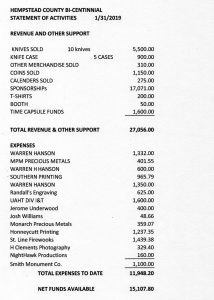