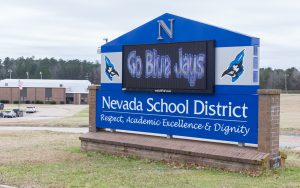 The Nevada High School Blue Jays (33-4) traveled to Hot Springs Thursday to compete in the 1A State Basketball Championship game Friday, March 7 at 7:45 p.m. against the Izard County Cougars (41-4).

The Blue Jay squad earned their way into the Championship game after going 10-2 in Conference play and going undefeated in post season play. Both Conference losses were to Dermott Rams. Since the Blue Jays last loss to the Rams, they have gone on a 12-game winning streak, defeating the Rams in the final game of both their Conference and Regional Finals. The Blue Jays had a close game against Timbo in the first round of the State Tournament last week but went on to defeat their Quarter and Semifinal opponents by a significant margin.

The Blue Jays will face off against the Izard County Cougars Friday for the 2019 1A State Championship. The Cougars come into the game with a 41-4 record on the season. All four losses came in non-conference play. The Cougars went 16-0 in the regular season conference play and went undefeated in their Conference and Regional Tournaments.

Coach Mullins said that this year’s squad is full of “go-getters”, are homegrown and have been with him from day one. He said he has every confidence in where his team is at right now. “You want to be playing your best ball this time of year,” Coach Mullins said, and the Blue Jays are doing just that.

The Blue Jays got in some practice time earlier today after arriving in Hot Springs. Coach Mullins said they will have an hour of court time Friday for their final preparations.

It hasn’t all been work for the Nevada boys. Coach Mullins said he didn’t want to confine the team to their rooms to sit and stress about the game tomorrow. “I want the guys to enjoy the experience,” Coach Mullins said. Coach took the boys to the Arena to watch some of the other State Championship games being played Thursday.

Coach Mullins said that the team is excited and ready for tip-off tomorrow night and will do everything they can to make their fans proud.

If you aren’t able to attend the game and would like to watch it, the State Championship games are being broadcast on AETN. If you are unable to watch, we will be updating the score in real-time on SWARK.Today.