Click here to watch excerpts of the interview with Perry Harness

Harness was born in Bear Creek, Arkansas on February 13, 1925. As the son of farming parents during the Great Depression, he understood the value of hard work and the importance of family at a very young age. Harness grew up in a small cabin with his parents, eight siblings and his grandparents who were a close part of his early life.

“We were a poor family but proud…hard times that I am so glad I went through. I would not want to go back,” he recalled.

Harness was well aware of the worries his parents had about their children serving in uniform since three of his older brothers were also in the military at the time he was drafted. When asked why his father picked up a raincoat and went to the orchard every evening, Harness’ mother replied that the “raincoat is to kneel on and the prayer [is] for all of the boys that were in service.”

Upon graduating from Marshall High School, Harness began his service in the Army. If you were “breathing and warm, they’d take you because they needed ‘em,” he said.

Harness trained at Camp Wheeler, near Macon, Georgia which he described as “seventeen of the hardest weeks of my life.” He then shipped off to Europe on the Queen Elizabeth, an ocean liner used for troop transport.

Harness landed in Scotland, but soon found himself in France for the Battle of the Bulge.

Though Harness trained in heavy artillery, the demand for front line troops was too great to ignore. “They were really looking for troops when they put me on the front line,” Harness explained. During his time in battle, Harness was a rifleman before getting his final job in the military: carrying the bazooka.

After weeks of intensive fighting in the cold and snowy battlefield, Harness was shot in the knee. Despite being under enemy fire and having limited immediate medical attention, he was able to find help, and get a ride to a treatment facility. The injury he sustained prevented Harness from continuing to serve in the Army. He was honorably discharged with a Bronze Star and a Purple Heart in Daytona Beach, Florida.

After returning to Arkansas, Harness got married and became a shoe salesman for what is now known as Harness Boots and Shoes on the square in Harrison.

In 1946, Harness was a founding member of the Boone County Disabled American Veterans. Just as he did in battle over 75 years ago, Harness continues to fight for those who have served our nation.

“Perry Harness’ life is a continuous story of fighting for causes much larger than himself, and I thank him for his service. I am pleased to be able to collect and preserve his stories,” Boozman said.

Boozman will submit Harness’ entire interview to the Veterans History Project, an initiative of the Library of Congress’s American Folklife Center to collect and retain the oral histories of our nation’s veterans. 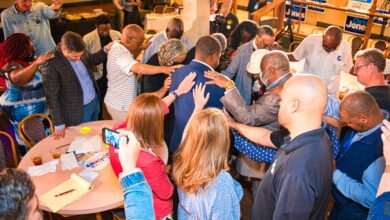