A new live oak tree was planted yesterday afternoon on the Texarkana campus of UAHT, with a British Consul General attending. The planting is part of a celebration of the 70th year of Queen Elizabeth II’s reign and part of her Green Canopy initiative, which she announced as a way British subjects can celebrate her Jubilee year by improving the environment from wherever they are.

On hand was British Consul General Richard Hyde, who has been charged to gather information for his government about conditions in the region of the United States that includes Arkansas, Texas, Louisiana, Oklahoma and New Mexico.

Once he arrived with a retinue of three staffers, he met privately with a group of UAHT officials in UAHT’s Texarkana Campus Center. After about 20 minutes, he moved to an outdoor gathering under an awning and was introduced by UAHT Chancellor Christine Holt.

In describing the purpose for his trip, Hyde said, “It’s about understanding, learning and figuring out what more this wider region has to offer for UK companies and for UK academic institutions, where we can create greater partnerships and actually encourage people to explore beyond the big metros and to come and do business do good business elsewhere as well.”

Hyde also described what he would be doing with the information gathered on trips like this. “It also gives me great credibility when I speak to governors. And I can say to them that I was in Texarkana, Arkansas and Texas, and then they look at me and say, ‘Well, why are you doing that? Now we don’t get out there enough. Why is the US foreign competition to shame us into into business in our region?’ So I take great pleasure in annoying people by dropping names or places to shame them and to have them realize we all need to get out more, we all need to visit more, we all need to travel more.”

Turning to the Green Canopy campaign, Hyde explained the importance of its way of celebrating the Queen’s Jubilee. “We actually wanted to leave something permanent, and the Queen’s Jubilee is a huge, huge thing for us this year, the 70th year of her leadership and service to the British people and the wider Commonwealth. She’s a great inspiration for many people in the UK. And I think further afield as well.”

Hyde also attempted to explain the appeal of the Queen in the United States. “I’ve made this joke a couple of times, and it hasn’t landed well, but you guys, maybe mistakenly, got rid of the royal family a few years back, but I know there’s a lot of affection still. A lot of Americans visit the UK and go visit Buckingham Palace or Windsor.

Whenever The Crown is on or the million and one documentaries about Diana, you get great, great viewership in the US. So there’s a certain affection still, sort of like family, and I like to believe that is much down to the Queen’s demonstration of a life of service.”

Hyde, who displayed the plaque that will be staked to the ground next to the tree, said he would be returning to make sure the tree is prospering. “We’ll have to come and do our annual watering visit,” he said in closing.

UAHT Chancellor Holt, in introducing Hyde said, “I know your visit is brief. But that only means you have to come back. So we can show you more of what we do here.”

Holt also mentioned that the UAHT Texarkana campus would be holding a grand opening for its new building, for which ground was broken last October. “We’re hoping to open in probably the spring semester. So it should be ready [for its grand opening] in October, November. But we’ll invite you back to come to the to the grand opening when that’s done,” she said to the audience.

After the speeches, the Consul General, the Chancellor and several other officials used shovels to arrange soil around the tree. Then Hyde spoke to SWARK.Today about his regrets about not coming to Hope “We hope to visit. But we just couldn’t quite get it on the time. And [Hope had] two former governors, one former president, we know, and possibly the next governor’s father. Yes, there’s a good connection.”

Asked about the day-to-day duties of a British Consul General, Hyde explained the advantages of being able to actually visit specific places in his assigned region and the purpose behind his fact-finding. “It’s about learning, so that I can then explain how we can better engage in this region. This our closest and most important political and economic ally. We need to understand what you got what what makes you guys tick so we can be remain relevant and good allies.”

Note: This story was written prior to SWARK.Today receiving news of Queen Elizabeth II’s death. 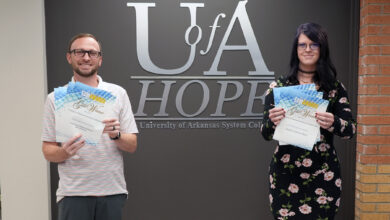 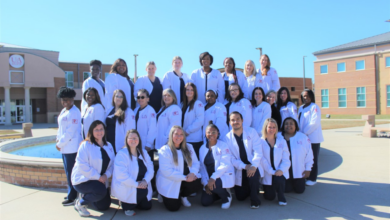