On the corner of Main and 7th in downtown Arkadelphia, Arkansas, you’ll find a cozy, completely renovated spot called The Farmhouse. Whether you are a college student, a professional woman, or a grandmother, this store has something for you—The Farmhouse carries home goods and kitchen elements alongside self-care essentials and boutique items, and they have even recently added baby products to their inventory.

Shaylah Montgomery, originally from Berlin, New York, moved to Arkadelphia a little over three years ago with her husband Justin, who has lived in Arkadelphia all his life. Montgomery is a full-time flight nurse and a part-time ER nurse in Hot Springs. She studied at SUNY Canton, starting out as an EMT and then furthering her education with a nursing degree. She did not always have a dream of opening The Farmhouse, but when she first saw the available site, a vision immediately came to her: she wanted to take part in rebuilding downtown, and she wanted to create a business that was simple, fresh, and open.

When transforming the location, Montgomery strived for a vibe that would make people feel at home in the store as soon as they stepped inside. The farmhouse atmosphere was ultimately achieved with the use of shiplap, wood, tin, and welcoming colors—but what made this aspect of the project truly special was that her husband completed the entire remodeling process on his own. Justin even built most of the displays featured in the store.

Another goal of Montgomery’s was to keep The Farmhouse a close-knit family business, and she has accomplished that by employing a comfortable staff of only five people. Her manager and main source of inspiration is her mother, Renee Morris. Morris is also originally from New York, but she moved to Arkansas to aid her daughter with The Farmhouse; she has played a major role in supporting Montgomery while also helping run the business.

Then there’s Callie Burch, who approached Montgomery during the remodeling phase. She had previously been interested in the space but found it was too big for her business, so she expressed a new interest in establishing a sort of partnership with Montgomery. She also offered to sell her own merchandise at The Farmhouse, which proved to be a wonderful addition to the store, as the beautiful items are handmade in third-world countries through dignified work. Montgomery described Burch as “very dedicated and hardworking.” Other members of The Farmhouse team include Montgomery’s sister-in-law and a student from Ouachita Baptist University.

Montgomery and her mother describe their customers as “family,” too. Morris told us that she knows most customers by name and that many of them often stop by to visit or to simply check in. To finish rounding out the warm vibe of the store, Montgomery proudly sells merchandise that promotes positivity, empowerment, and giving back. One example of this is her collection of “The Little Word Project” bracelets. Each bracelet contains an encouraging message, and the idea is for people to wear those heartening words for as long as they need them before passing the bracelet on to someone else, thus spreading optimism and love in a unique way. There is even an app that can be downloaded for anyone who wants to register a bracelet and be able to track its journey after it has left their wrist.

The Farmhouse will be celebrating its two-year anniversary in 2019. When asked what advice she would give to someone wanting to start a small business of their own, Montgomery replied with, “Be sure to have a good business plan and definitely a good CPA. Have a plan and a vision in mind when creating your business.”

Montgomery takes pride in being located in the heart of Arkadelphia, and she encourages shoppers to stop by and visit.

You can also find The Farmhouse online. 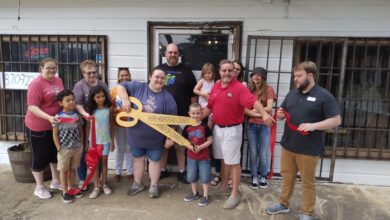