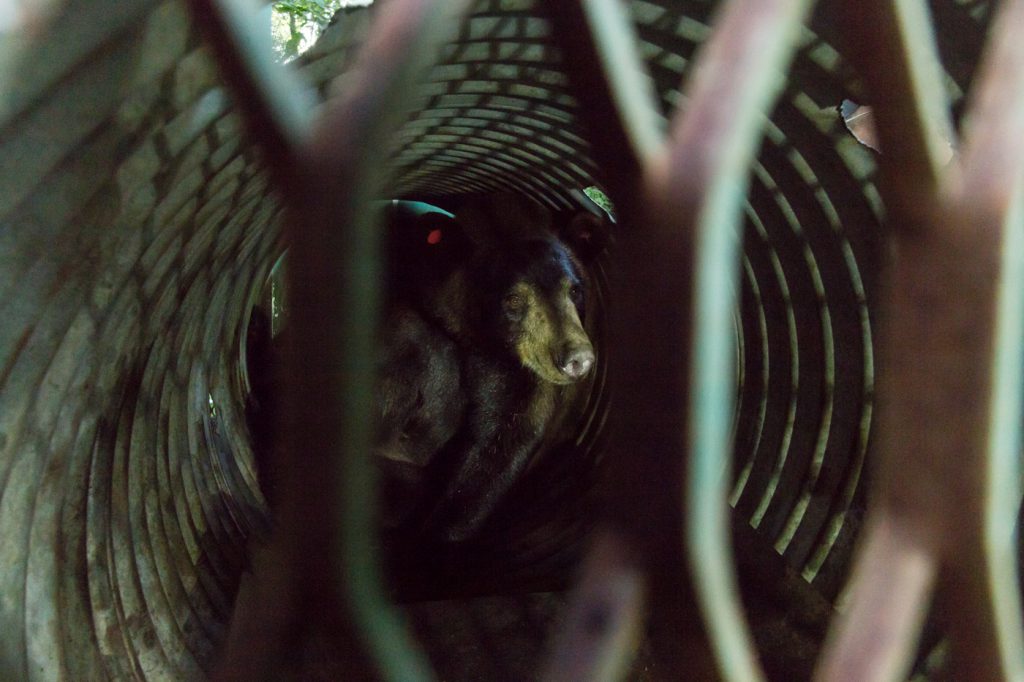 All the pic-a-nic baskets, honeycombs and bird feeders in the city of Hope are safe tonight now that the Arkansas Game and Fish have successfully captured the fugitive black bear that has been playing hide-and-seek with biologists, game wardens and police officers the last two days.

Wildlife biologists relocated their bear trap Wednesday evening from Grandview Prairie to a residence located between Heather Manor and Beryl Henry School. The biologists baited the trap with the bear’s apparent kryptonite…cans of sardines.

Griffin Park, Arkansas Game and Fish Biologist Supervisor for Region 5, said the trap was only set about an hour before the elusive adult male black bear found his way inside and found his free reign in Hempstead County at an end. 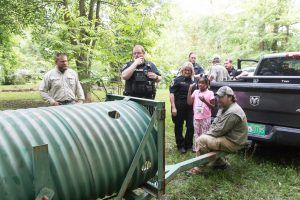 The biologists and Hope Police Officers gave the residents of the house and some of their family who came over to witness the event a chance to get a closer look at the bear through the grating on the end of the trap. The group, fascinated by the large omnivore, got within a couple of feet of the trap to attempt to take some pictures and get a closer look but the bear wasn’t done with his mischief. With a simple lunge toward the gate, the bear set the group sprinting with a reaction time Olympics runners would kill for. One woman took off running so quickly that she ran right out of her shoes.

After a shared laugh, biologists got underway with the next phase of the process, the relocation of the black bear. Park said they are going to take the bear and release him in the Ouachita National Forest where he can hopefully find himself a place where he can go on about being a bear. 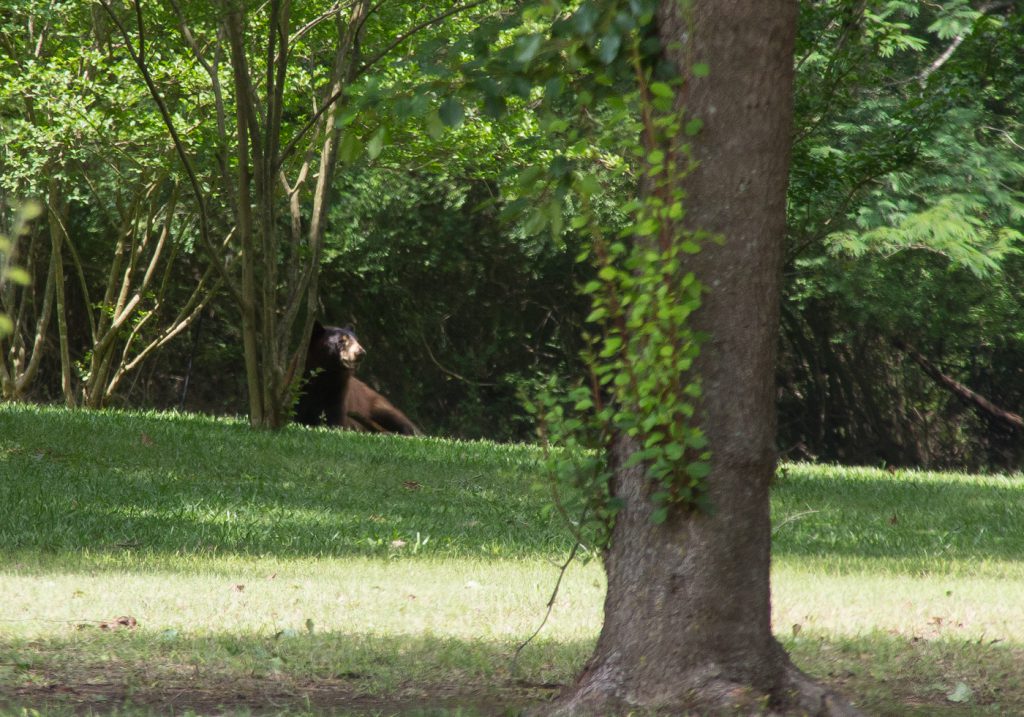 An unwanted visitor has been calling the Hope area home the last few days and has caused a bit of a ruckus.

According to Griffin Park, Arkansas Game and Fish Biologist Supervisor for Region 5, the approximately 3-5-year-old male black bear is likely the same one spotted Monday crossing Highway 67 in the Guernsey area and seen Tuesday around Melrose Ln and crossing West Avenue B. The Bear was spotted again Tuesday night around 11 p.m.

The local resident who spotted him said he saw him walking south in the 700 block of S. Elm St. before it went into the brush toward the railroad tracks around the 900 block. Attempts to locate the bear were fruitless until he was spotted again Wednesday morning around 10 a.m.

Hope Animal Control Officer Tammy Austin said the bear was spotted Wednesday morning crossing west across Elm St. before going back onto the tracks. Hope Police Officers and Game and Fish Officers and Biologists were able to get the bear to move south along the tracks. The hope was to get the male black bear to voluntarily head out of the city and into the county. The bear stuck to the tracks until almost Beryl Henry School before heading west into the woods and away from the tracks.

Game and Fish Officer Andrew Watson said that the bear was identified by a number on the tag in its ear. The bear was originally tagged in Cass County Texas and was spotted as recently as two weeks ago in Miller County.

Game and Fish Officer Jeffery Neel said that it’s common for younger male bears to be displaced this time of year as females come into heat and the bears are run out of the mother’s territory so that she can mate again. Neel said there isn’t a real dense bear population in the area so we don’t hear much about them until they roam into town or an area with a lot of people. Neel estimates the bear is around 5 years old and says he looks healthy. He estimates he weighs at least 225 pounds.

The bear was located again around 3 p.m. when it was spotted again on S. Elm St. It entered the woods again and was located a short time later in the back yard of former Mayor Dennis Ramsey. Ramsey said the bear made a treat of his blue bird house, breaking it and eating the contents.

Game and Fish made the decision to attempt to trap the bear and will be putting out their trap Wednesday evening. The option of tranquilizing the bear has also been discussed. The bear will be relocated but the location will be decided by wildlife management.

In the meantime, Game and Fish and HPD advise residents to keep their pets and children inside and to keep trash and food put up to avoid attracting the bear. They advise that if you see it, you avoid it, do not feed it and do nothing to antagonize it. The bear has gone out of his way to avoid contact with humans and has not behaved aggressively but is a wild animal and should be given a wide berth.

If you spot the bear, Assistant Chief Kim Tomlin of the Hope Police Department asks that you call 911 so that officers can respond to the area as quickly as possible.