“As part of my continued evaluation, I have come to the conclusion that a change in leadership is necessary to move our football program forward and position it for success,” Yurachek said via the press release. “It is clear that we have not made the progress necessary to compete and win, especially within the Southeastern Conference. Throughout our history in football, as well as with our other sport programs, we have demonstrated that the University of Arkansas is capable of being nationally competitive. I have no doubt that as we move forward, we will identify a head coach that will help lead our program to that benchmark. I want to express my personal and professional regard to Coach Morris and thank him for his investment in the lives of our student-athletes.”

Tight end coach Barry Lunney Jr. will be the interim coach, Yurachek announced as the Razorbacks have an open date this week before closing with SEC games Nov. 23 at No. 1 AP ranked LSU in Baton Rouge, La. and Nov. 29 against Missouri at War Memorial Stadium in Little Rock. Fort Smith native and former Razorbacks quarterback Lunney is the longest Arkansas tenured assistant as the only holdover from Bret Bielema’s 2013-2017 staff and the staff’s lone UA alum.

Morris inherited an Arkansas short stick with Bielema’s 2017 Razorbacks going 4-8 overall and 1-7 in the SEC. Unlike his previous college head coaching job inheriting a 1-11 SMU team and after an opening  2-10 season improving the Mustangs of the American Athletic Conference to 5-7 and 7-5 with the Frisco Bowl still to play when he accepted the Arkansas job in December, 2017, Morris wasn’t improving Arkansas from last year’s overall and SEC marks. However when asked after Saturday’s 26-point nonconference loss to Western Kentucky from the second tier Group of Five’s Conference USA, if he’s the guy to resurrect the Razorbacks, Morris insisted, “Absolutely I am the guy. No question.”

He amplified on the situation he inherited trying to build from the SEC basement with a team lacking depth particularly in the offense line. “I knew that this was going to take some time,” Morris said. “I knew this was going to be a process of recruiting and developing and building, especially in this conference. I knew the strains that take place weekly in this conference and the depth that it needs to be successful. Right now, we don’t have that. We’ve got to go get that and we’ve got to recruit to it, and we’ve got to continue to develop. Right now, it’s unfortunate we’re playing as many young guys as we’re playing, but that’s the truth.” Yurachek noted Morris’  lack of SEC success but it seems Morris struggles against lesser teams from lesser leagues proved his ultimate Arkansas undoing.

Last season, against  victories in Fayetteville over American Athletic Conference member Tulsa and lower FCS division Eastern Illinois, Morris’ Razorbacks lost 34-27 in Fort Collins, Colo. member Colorado State and were badly beaten, 44-17 in Fayetteville by North Texas of Conference USA. Arkansas opened 2018 in Fayetteville unimpressively prevailing, 20-13 over FCS member Portland State and while avenging the Colorado State loss with breaking a 34-34 tie with a 21-0 fourth-quarter and 55-34 victory in Fayetteville, trailed 24-7 at half and lost, 31-24 in Fayetteville  to the  Mountain West’s San Jose State Spartans coming off a 1-11 season and now only 4-6.Western Kentucky, now a bowl eligible 6-4 but losing earlier this season to the University of Central Arkansas, became Morris’ last straw.  Particularly with the Reynolds Razorback Stadium seats more unfilled than filled while Ty Storey, the Charleston native and 2015-2018 Razorback who started nine games as Arkansas’ quarterback last year, starred for Western Kentucky. Storey moved on as a graduate transfer to Western Kentucky as Morris changed direction at quarterback recruiting two since benched graduate transfer quarterbacks.

He had turned down college assistant coaching positions until in 2010 accepting Tulsa coach Todd Graham’s offer to be offensive coordinator and called plays for a 10-3 Golden Hurricane team.

Clemson Tigers coach Dabo Swinney, then a struggling coach rather than a 2-time national championship coach, gambled on scrapping his offense and bringing in Morris as his offensive coordinator and installing Morris’ Spread offense. Swinney and since retired Clemson athletic director and former Arkansas senior associate athletic director Terry Don Phillips say it’s still Morris’ offense that Swinney uses sustaining Clemson’s success. The Tigers improved from a 6-7 the previous season to 10-4 in 2011 with Morris coordinating the offense then on to 11-2 and 11-2 for 2012 and 2013 and 10-4 in 2014 with the Morris recruited Deshaun Watson quarterbacking.  Watson would lead the 2015 national championship and the 2016 national championship while Morris was at SMU.

Morris came to Arkansas energetically extolling a “Hammer Down, Stay in the Left Lane lightning pace ” offense. He quietly shelved the hammer early in the 2018. Tough SEC defenses plus the inability of Arkansas’ defenses to get the opposing offense the field silenced the slogan.“We want to be one of the most explosive offenses in the country,” Morris said postgame Saturday when asked about the left lane become the stalled lane. “But we  don’t want to get out there and play to a speed at which we’re going three-and-out and putting the defense back on the field. There’s been some adjustment to that. I think you look at where I’ve been before and how fast we play, sometimes you just have to adjust to it. This is not an overnight fix.”

The offense, the defense, the talent level, Morris said would come with recruiting and come with time. But at 4-18, 0-14 with emptying seats and seven straight losses, Chad Morris’ Arkansas time ran out.

Morris’ show at Arkansas does come with more than nice parting gifts. The buyout for his six-year contract is a reported $10 million. With previous athletic director Jeff Long fired in November, former senior athletic director recently become Ohio University athletic director Julie Cromer Peoples was in charge both of dismissing  Bielema closing the 2017 season the day after Thanksgiving and the coaching search hiring Morris to Arkansas ultimately  coinciding with Yurachek’s Arkansas arrival. 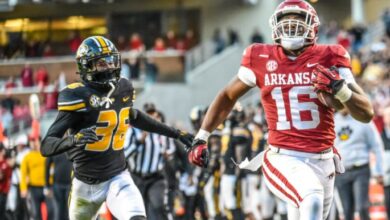 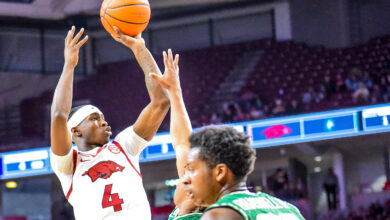