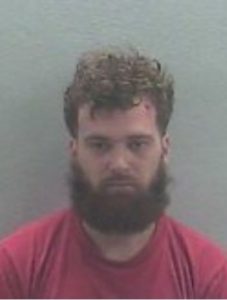 A Hope man was arrested and charged with DWI after he allegedly failed to stop at a stop sign and crashed into a house on Avenue B in Hope.

According to Assistant Chief Kim Tomlin, Jordan Russell Rodden, 25, was arrested following a call about car crashing into a house on West Avenue B at the intersection with Generator. Officers arrived on scene to find a gray Toyota Corolla crashed head-first into the residence, but the driver was not on scene.

According to the residents, they were inside when they heard a loud crash and felt their house shake. They went to see what happened and saw the car and driver, who they said was a white male. The driver then left the scene. Tire marks from the Toyota could be seen coming from Generator, where there is a stop sign, over the curb on Avenue B and into the yard where it the car struck the house.

Officers from the Hope Police Department began searching the area for the driver. After running the car’s registration, the officers began looking for Rodden. Assistant Chief Tomlin said he was located on West 6th a short time later and arrested.

Rodden was transported to the Hempstead County Detention Center and booked for DWI, unsafe vehicle operations, driving too fast for conditions, disobeying a stop sign, no seat belt, leaving the scene of an accident and filing a false report of criminal wrongdoing.