A Prescott man ended up soaked and in jail with a dog bite after escaping arrest and leading law enforcement on an extended pursuit Thursday during a traffic stop that was a result of an 8th North Task Force and Hempstead County Sheriff’s Office undercover operation. 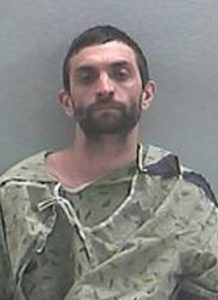 According to Hempstead County Sheriff James Singleton, at around 2:08 p.m. on Thursday, April 18, a traffic stop was made on a vehicle driven by Steven Blake Cox, 28, of Prescott. The stop came as a result of an undercover operation which the 8th North Task Force was assisting Hempstead County Investigators with. During the stop, Cox was placed under arrest for delivery of controlled substance (methamphetamine), put in handcuffs and placed in a Hempstead County patrol vehicle while a search of the vehicle was conducted.

During the search, the Sheriff said, Cox got one of his hands free of the cuffs and get the door of the patrol vehicle open. Cox allegedly fled on foot. Task Force Agents, deputies and officers from the Hope Police Department began a pursuit but lost site of him. K9 Officer Justin Dean and his partner Rojo tracked Cox briefly but the K9 lost the scent. Sheriff Singleton said law enforcement searched for Cox for about two hours when they received a 911 call advising them that their suspect was possibly walking down Patmos Road.

Officers responded to the area and spotted Cox who allegedly fled on foot when he saw them. Sheriff Singleton said Cox ran across a pasture and into the woods, taking to the flooded creek near Hempstead 56. Some officers set up a perimeter to keep Cox contained while others went in to pursue him. The officers crossed the creek and pursued him in the pouring rain to a pasture at the intersection of Patmos Road and Hempstead 56.

Sheriff Singleton said Hope K9 Officer Justin Dean ordered Cox to stop running and surrender or he would send in his dog. Cox reportedly refused to surrender so Dean sent Rojo to apprehend him. Rojo caught Cox, applying a bite, at which point he reportedly surrendered and was taken back into custody.