Banner Hope Center, founded in July 2018, is a faith-based program for juveniles suffering from drug addiction in Hempstead and Nevada counties, and is about to start its second summer camp program.

In early 2018, a small prayer group at First Baptist Church started praying for how Hope could start offering faith-based drug treatment and rehabilitation. Pastor Daniel Bramlett, Eric Turner (now Director of Banner Hope), Val Knight and Steven Mullins met every Sunday morning before church, praying that the Lord would show a way for them to help those suffering from drug addiction. The group’s initial idea and expectation was a faith-based, residential, adult rehabilitation center in Hope, but they had no building, no training, no funding, they just prayed.

One day, the phone rang. The Arkansas Baptist State Convention talked to the prayer group about a vacant building past the Migrant Center in Hope on Smith Road. The building had been empty for several years and the State Convention was looking for a use. Pastor Bramlett had just been given a $15,000.00 gift to be used for any ministerial project. However, the building had last appraised for $325,000.00. The State Convention said, “Make an offer.” Fifteen Thousand Dollars bought the building for First Baptist Church and the project began taking shape.

The prayer group didn’t stop praying. They visited with community leaders in Hempstead and Nevada Counties, and they sought advice and insight from Renewal Ranch, a male faith-based rehabilitation center in Houston, Arkansas. What the group found was a need for drug treatment and diversion of juveniles that get involved with drugs.

The success of the 2018 summer camp cannot be overstated. At the beginning of camp, several juveniles were testing positive for drugs. At the end of the three week camp, 100% of the participants were sober.

In August 2018, Banner Hope Center began the after-school program for two days after school. Since the creation of Banner Hope, there have been fifteen total participants, aged between 13 and 18, and four of them have successfully graduated out of the juvenile court system.

Banner Hope Center has one employee, Director Eric Turner. He and his wife, Hanna Turner, along their family, live on the Banner Hope site.

Banner Hope is not possible without volunteer support from churches in Hempstead and Nevada Counties. These churches have sent volunteers to help fulfill the mission of Banner Hope:

Businesses and individuals have also donated items to be used in the Banner Hope Center. Bitsy McCorkle with Hope Floral has donated food baskets and Steve Montgomery of McDonald’s donated his seating booths during his business’s renovations. Sheba Smith of Sheba’s restaurant provided clothes and fleece blankets for some of the Teens. Red River Heating & Air supplied all of the air conditioning work for the building and Wilson Furniture donated the initial furnishings for the center. Farmhouse in Harmony, DIY Workshop has also donated several wooden signs and different decor items for the facility. Farmhouse in Harmony is also hosting a fundraiser this week, (May 20th through May 24th) where a portion of all sales will be donated to the Banner Hope Center. This includes any groups who come for the DIY Workshop. Farmhouse in Harmony is located at 101 East 16th Street, Hope, Arkansas (One door over from Medi-Mart).

Interview with Director Eric Turner and his wife, Hanna Turner

What are the main obstacles to Banner Hope’s mission of juvenile drug rehabilitation?

We haven’t even hit our one-year mark yet, so we hope that the problems we’ve encountered this first year will disappear into our second year. But we always need more people volunteering to let these kids know that they’re loved.

Where do you see Banner Hope in 5 years?

It’s our hope that our communities’ children don’t need Banner Hope in 5 years! But until we get to that point, we would love to see us be able to take more teenagers into our program, to see more churches involved, and to be able to expand our after school program to every day. Not to mention our goal of fulfilling our initial plans of offering adult treatment. We want to see lasting change in our teens’ lives and we want to be able to reach kids who are not in trouble, but who are on the path to trouble. One of our major goals it to give these teens a new network of good people, a new network of loving people, so that these kids know that we love them, that God loves them, and that we want them to have good, love-filled lives.

This year’s summer camp will be two programs. June 10 through July 5 (four weeks) and July 22 through August 9 (three weeks).

Each church will send a pastor to teach and preach for one week in the Summer. There is a special emphasis on meditation and prayer time, giving the teens an opportunity to cut out the distractions and spend time on self-development and growing their relationship with God. The teens will hear testimonies from people who are recovering drug addicts and will receive tutoring and reading instruction from a teacher on site.

The teens will also get skills training. There is an auto shop with a truck which was donated to be repaired. There is also culinary arts training and job interview training. There are some ideas for this summer to get the teens involved in not just chores around the Banner Hope Center, but also going out into the community to complete community projects, or possibly start a community garden.

Banner Hope Center is 100% funded and supported by private donations from churches, businesses, and individuals.

If you wish to help with non-monetary donations, Banner Hope Center is seeking help in the following areas:

To make a monetary donation:

Also, if you know of a teenager who could benefit from the program at Banner Hope Center, please contact Eric Turner. 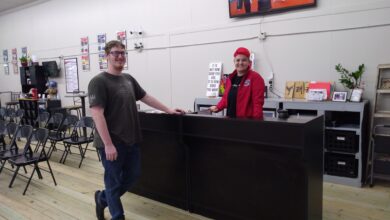