FAYETTEVILLE — Arkansas’ special teams were good last season, but Coordinator Scott Fountain is hoping they can be even better in 2022.

“I think we can be better for sure,” Fountain said. “It’s so important to me for us to be a good punt-return team. As a kickoff return team, I think it’s so important to be smart in your decisions. You know, when to bring it out, when not to bring it out, when to fair catch it, etcetera. I want us to just continue to thrive and be the best we can.”

As a true freshman, Little stepped in and made 20 of 24 field goals. Much like Fountain, Little is looking to post even better figures this fall.’

“Obviously it’s nice to make all of them, but I really do think that’s where I’m trying to improve, is on longer field goals. Just being able to put those through. It’s common sense, but just putting more field goals up for the team. I want to be above that 90% mark. Those are high expectations, but I think I can get it done.”

Actually Little has a reason to use the 90% mark and explained why.

“A lot of elite guys that are in the NFL, and if you see guys that get drafted, they usually have a 90% season or a 100% season,” Little said. “So just making more points for the team and making sure my opp is crisp with Reid and the snapper.”

Little is working to get his leg stronger obviously so he can be more successful on the 50-plus kicks.

“I definitely feel like I’ve gotten a stronger leg this offseason,” Little said. “I had a 52 in the scrimmage this past weekend and I cleared it by a good amount. I definitely feel like my leg is getting stronger. I’d say I’d probably about three more yards comfortable going a little further than last year.

“In warmup, sometimes the wind goes into you, sometimes it’s with you. I kind of make that a game time decision on what I feel like is doable during the game. But I think if there was no wind going both ways, I feel like I’m good from about 56 in. Going both ways I’d get it to the uprights.”

Bauer punted 58 times in 2021 averaging 43.3 yards per punt. He had 23 that were fair caught and 16 downed inside the 20. He had 14 punts that traveled 50 yards or more. In his career, the redshirt senior has averaged 41.6 yards on 156 punts. Fountain likes what Little and Bauer are both doing this preseason and talked about how they can get better.

“We’re just always talking about consistency,” Fountain said. “For Cam, he started out last year 8-for-8. He kind of hit a little bit of a lull, and then he finished up really strong. I always just really preach to him about being really consistent in what he does. The good thing is this is the first time we’ve had the holder and the field goal kicker back. That’s a big deal. Now, we’re breaking in a new long snapper, so that’s different for them. But, that’s really kind of what we’re looking for. We have the (Jake) Bates kid that has transferred in and done a really good job of competing as well. I’ve been very pleased with him.”

Bates is a former soccer player at UCA in 2018-19. He transferred to Arkansas briefly, but then left for Texas State. Bates then opted to transfer back to Arkansas for the 2022 season. Bates is challenging Little for the kickoff duties and is a very good option to kick field goals and point after touchdowns if Little were to get injured.

“The good thing for Cam, like anybody, Cam is our field goal kicker, but he’d love to be the kickoff guy,” Fountain said. “So he’s competing his tail off and he’s certainly better than he was a year ago. He did kick in the bowl game for us. And then Bates is kind of a guy that was a soccer player turned football that’s he’s always been a kickoff guy. So that’s kind of why we brought him here to see how he would do. But he’s done very well. This scrimmage this Saturday will be really big for me to see how they kind of finish up camp.”

Bauer is getting a challenge at punter from Max Fletcher who is a true freshman from Australia. Fletcher’s brother is the punter for Cincinnati, Arkansas’ opening opponent.

“They both have done really well,” Fountain said. “Reid is a guy that when I got here I didn’t know a lot about him. We call him dark horse Bauer. He never goes away, never quits playing good ball. He’s had a great camp. Fletcher has had a great camp. It’s going to be interesting. It’s going to come down to the wire with those two I think, but I’ve been very, very pleased with both of them. We are much better there than we have been in the past.”

One advantage few think about is Bauer was outstanding as a holder last season. Since Fountain likes the punter be the holder for placements could that figure into the punting battle?

“That certainly could play into it,” Fountain said. “We typically will travel five or six specialists. We try to carry two kickers, two punters, two long snappers. Or you can take one off if a guy is a combo guy. Like Sam Loy was capable of kicking off last year, but then also he could punt. So that certainly helps us, that brings value there. 100% the holder is going to travel, right? That’s really important.”

With Jordan Silver finally out of eligibility the Hogs will also have a new long snapper this season. Eli Stein was signed in the Class of 2022. John Oehrlein and Francisco Castro are two walk-ons also in the competition.

“It’s really very similar to the punting job,” Fountain said. “It’s been a really tight race. We have him and John Oehrlein, who has been in the program for a while and Francisco Castro have all been working at short snapper and long snapper. They’ve been very competitive. Eli, as a freshman, just like Fletcher, you just have to grow up real quick. Today was a rain day for us. If it’s raining and we are indoors, we’re always going to go outside and handle the ball. So, I think it was really good for him to get that today. I’m glad him and Fletcher both were able to get outside today. That will probably come down to the next 4-5 days.”

Fountain talked about the gunner candidates he has in mind. That was a role he felt good about TJ Hammonds in 2021.

“Right now, we have about four guys,” Fountain said. “Ladarrius “Day Day” Bishop’s back. He was hurt this spring. Day Day did that for us a little bit a couple years ago. Day Day’s value, he’s very fast, and he’s a tackle. He plays on defense. You have AJ Green, you have Matt Landers and Isaiah Sategna plays there, as well. So, those are four I’m excited about. They’re all fast kids, and we’ve just got to see who can get in there and get physical the most and get off a hold up and those type things.”

Fountain also talked about the return possibilities for both punt and kickoff.

“At punt return, Bryce Stephens is back,” Fountain said. “He had a big return for us in the LSU game last year. Isaiah Sategna is also working at that spot. Harper Cole. Harper Cole to me is kind of a (Nathan) Parodi-type guy. Very dependable. Very reliable. He’s been back there for a couple years. And then we’ve worked Jadon Haselwood back there a little bit, as well. So, those are kind of the four guys we are focusing on.

“At kick return, that’s an area I think we can be better at this year. We have AJ (Green) back, who kind of did some good things for us late in the year. Isaiah Sategna is back there as well. Matt Landers is working back there a little bit, and Rashod Dubinion, which we call Dub, he’s back there and has done a great job as well. So, we’ll kind of show those guys here the next week and then try to make a decision.”

Arkansas will return to the practice fields on Thursday. 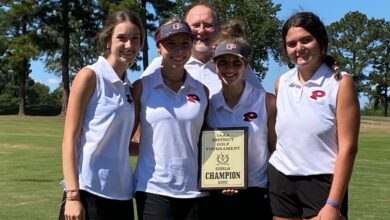