A head-on collision just outside Fulton on Highway 67 Wednesday sent four people to the hospital, one by helicopter.

At around 3 p.m. on Wednesday, January 8, a Ford F-150 with three occupants was traveling east toward Fulton on Highway 67, about a mile west of the river when, according to witnesses, a small, gray KIA SUV that was traveling west veered across the center line into the eastbound lane. The driver of the Ford hit the brakes and attempted to swerve to avoid the SUV, but the two vehicles collided front passenger side to front passenger side. The Ford came to a stop almost instantly in the eastbound lane and the SUV spun around and came to rest facing east on the eastbound shoulder, almost parallel with the Ford.

All three occupants of the Ford were injured, as well as the driver of the SUV. Witnesses rushed to aid the injured until help was able to arrive on scene. LifeNet EMS had several ambulances respond to the crash along with a helicopter for the woman who was in the passenger seat of the Ford.

Arkansas State Police and Miller County Sheriff’s Deputies closed Highway 67 down while LifeNet crews tended to patients and firefighters from Mandeville Fire Department worked to extricate the injured from their mangled vehicles.

LifeNet’s helicopter was landed on 67, just east of the crash. Once firefighters were able to cut and force the passenger door of the Ford clear, firefighters and medics carefully pulled the woman from the truck and transferred her to the helicopter. The driver and third passenger and the driver of the SUV were all transported by ambulances to Texarkana.

Family members of the occupants of Ford flocked to the scene when they learned of the crash. Some of the family had to be asked to move back from the scene so firefighters and medics could tend to their loved ones and had to be cleared from the vicinity of the helicopter by Troopers before the helicopter was able to lift-off and transport their loved-one to the hospital.

Identities of the injured were not available on scene and no citations had been issued at the time. 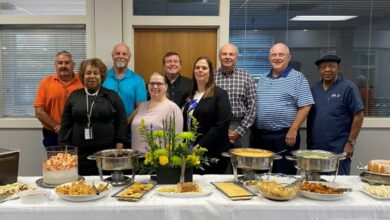