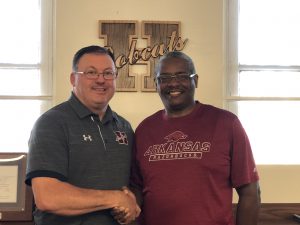 HOPE – A new member was seated on the Hope Public Schools Board here Monday night, and current board president Willie Buck was awarded the gavel for a new term.

Alvis Hamilton was elected to the board without opposition from Zone 7 in May, replacing former board member Jesus Coronado, who did not seek re-election.

“We are excited for his service as a board member,” Dr. Hart said in welcoming Hamilton.

Hamilton is retired from U. S. military service and previously served as a Hope Police Department School Resource Officer for the HPS.

Buck, first elected as board president in 2016, was given the post for another year by acclamation, as were Vice President Linda Haynes and Secretary Kathryn Dickinson. Coronado previously served as board secretary.

Both Dickinson, representing Zone 6, and Zone 4 Representative Jimmy Courtney were re-elected to the board in May without opposition.