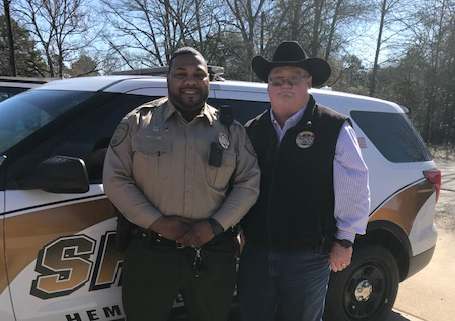 Students at Blevins Schools are getting used to a new face on campus as of Wednesday after the Blevins School Board voted Monday to approve funds for a full-time resource officer through the rest of the school year.

According to Sheriff James Singleton, Deputy Orlando Dennis began his duties Wednesday as the Blevins Resource Officer following the agreement worked out by the school district and the Hempstead County Sheriff’s Office. Deputy Dennis will serve in the position through the last day of school on May 24th. Sheriff Singleton said he and the Blevins School officials will discuss details of a contract for the 2019-2020 school year at a later date.

“I am proud that we were able to work out details on funding for the rest of this year and I look forward to discussing keeping the Resource Officer on campus next year,” Sheriff Singleton said. He continued, “Funding has always been an issue and I am glad the school district was able to find funds to have a deputy on campus full-time.”

Sheriff Singleton said the agreement is to provide for the safety of the children at the school. The decision by the school board comes on the heels of a fight said to have involved as many as 100 adults and student that broke out on the campus last week after a game between Blevins and Mineral Springs. The investigation into the incident has resulted in the arrest of three adults and juvenile action being taken against four students.

There have been differing opinions about having law enforcement on school campuses but Resource Officer Deputy Dennis, who volunteered for the assignment, said that he isn’t on campus to take kids to jail. Dennis said he is available to the students to help them with any problems they have and will do his best to work with them to make good decisions and judgments and to help them learn from their mistakes.

Deputy Dennis said, “I’ve been working the streets for a long time now and I’m good with kids. I hope I can help them become better people and citizens.”

Deputy Dennis said the decision to bring a Resource Officer on campus is a good thing for the City of Blevins and for Hempstead County and that his first day went well. “The kids welcomed me with love,” Dennis said, “and the teachers were nice and willing to help me get adjusted.”