Both Men’s Coach Chris Bucknam and Associate Women’s Head Coach/Sprints Coach Chris Johnson, pinch-hitting at Wednesday’s press conference for Coach Lance Harter, say this non-team scored season opener basically is a get your feet wait renewal of competition, especially for the sprinters, jumpers and vaulters who have been practicing since September but other than for some at  a very small meet in early December haven’t competed since June’s NCAA Outdoor  or earlier.

While NCAA qualifying marks aren’t a premium this early, Johnson said it’s possible one of the Razorbacks veterans could get on a roll early and pop a NCAA qualifier in the pole vault or the sprints.

Bucknam also said he “wouldn’t be surprised” if some of his men popped a national qualifier in a “ballistics event” including the sprints and long jump and triple jump.

Both Bucknam and Johnson said they’ll be checking the body language and competitive signs of their debuting newcomers.

“It’s an evaluation of what we need to improve upon,” Johnson surmised of Friday’s meet. 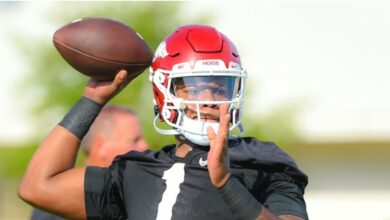