It’s the most wonderful time of the year. But how and when did it come to be that way? Obviously, as the holiday stands today, we (the Christian world) celebrate the birth of Jesus of Nazareth, born the Son of God, who would go on to give His life for the sins of mankind. But, Christmas is celebrated by secular people as well, and non-Christians all over the world have adopted at least some of the holiday. In fact, in Japan, Christmas is a major holiday that is celebrated by a vast majority of the predominantly non-Christian country.

It’s no real surprise. Christmas is a great holiday, built on traditions that are universal and transcend cultural differences. Good will, peace, and giving to those you love aren’t held by any one culture over another. It’s no wonder that so many people, both religious and secular alike, have chosen to celebrate Christmas.

Christians are given an account by the gospel that Jesus was born to Mary and Joseph, laid in a manger, visited by shepherds and wise men from the East, and heralded by angels. However, nowhere in the gospel does it give a day, month, or even season for the birth of Jesus. And, many religious scholars hotly debate whether the Son of God was even born in December. Many point to Him having possibly been born in the spring, citing the unlikeliness of shepherds being in their fields in winter. Others contend that the winters around Bethlehem are relatively mild, so it’s not outside the realm of possibility that the shepherds could have been there.

Regardless of the actual day of the birth of Christ, it would be almost four centuries later during the reign of the Christian emperor Constantine that Christmas would first be observed by the Church of Rome. At the time, many citizens of what was becoming the Holy Roman Empire were still clinging to pagan traditions that predated Christianity.

One of these traditions, Saturnalia, had traditionally been a time of celebration and gift giving in Rome, where carnival-like festivals were held and sacrifices made to the Roman deity Saturn. Constantine, seeking to both unify Rome in its religion and squash the remnants of pagan worship in his empire, declared that henceforth December 25 would be held as the celebration of the birth of Christ. The mass (or religious observance) held at the time would be called “Christ Mass” which would eventually be anglicized to “Christmas” as we now call it.

Over the years and centuries that followed, other traditions made their way into the Christmas holiday. The Christmas tree, now seen as a symbol of the birth and resurrection of Christ, was adapted from pagan and Germanic cultures, which also used the evergreen tree as a symbol of renewal in the bleak midwinter. Sometime during the 1600s, Germanic clergy began to notice that many worshippers had begun to put seasonal trees in their homes during winter, decorating them with fruits and papercrafts. Worried that these traditions might turn Christians from the meaning of the holiday, the clerics began incorporating the trees into the Christmas tradition.

It was also during that time that Oliver Cromwell, a Puritan leader in Europe during the 17th century, declared that he would rid England of the decadence that he believed had overtaken it. As part of his efforts to erradicate this perceived menace, he cancelled Christmas celebrations across the country in 1645. However, the people restored Charles the Second to the throne, and the holiday was restored to a grateful populace.

As the years rolled on, many Europeans came to celebrate Christmas with family dinners, Christmas trees, and many of the trappings we still use today. However, the modern Christmas tradition owes much of what it eventually became to English novelist Charles Dickens, whose story “A Christmas Carol” served to build a bridge between those who have and those who have not during the holidays. English tradition kept strict lines between nobility and common folk for centuries, and this extended into a sort of grim classism that permeated even Christmas time in England during the Victorian era. However, with the tale of Ebenezer Scrooge, a miserly businessman who held distain for those he considered beneath his station, and the three spirits that haunt him over the course of Dickens’ story, people all across England began to celebrate Christmas with new fervor and brotherhood, changing the way the holiday was celebrated thereafter.

In America, the early settlers were even more puritanical than Cromwell’s movement. In fact, the celebration of Christmas was actually outlawed in many places in the early years of the New World. It wouldn’t be until after the Revolutionary War that Christmas would take root in America, almost 150 years after the pilgrims came across the ocean. Like his contemporary Charles Dickens, American author Washington Irving would be instrumental in changing the way Americans came to view Christmas. Much like England, the early 1800s in America saw a divided people, full of strife and classism. Irving’s “The Sketchbook of Geoffrey Crayon” may not have had the commercial success and iconic staying power as Dickens’ work, but its tales of an English squire inviting strangers to celebrate the holiday with him resonated with America, cementing Christmas as a holiday of brotherhood and peace in the young country.

The early 1800s truly was when many of the modern trappings of Christmas came to be. It was 1822, in fact, when Episcopal minister Clement Moore penned “Twas the Night Before Christmas,” which would become a well-read tradition in many families going forward. The story, as so many already know, is an account of a visit from Santa Claus.

Santa got his start as a monk named Nicholas of of Myra, who was born in 270 AD. Though of Greek descent, Nicholas was born in Turkey, and would become the patron saint of children, sailors, merchants, and many others. His habit of giving gifts in secret would draw him into the tradition of Christmas as the red-suited, white-bearded holiday icon that so many have come to know and love. In the late 1700s, Dutch traditions of observing the death of “Sint Nikolaas” or “Sinter Klaas” would eventually be Americanized to “Santa Claus” as we now call him.

Santa would get his bright red suit and cheerful, elf-like appearance in the late 1800s when cartoonist Thomas Nast would illustrate a version of “Twas the Night Before Christmas” that would immortalize the image of Santa in the minds of generations of children.

Christmas has gone through many changes over the years since Jesus was born in Bethlehem, and those written about here can barely do justice to the multitude of little practices that have gone into making it a holiday enjoyed by so many. For this writer, I can only say that, however you choose to celebrate, and whoever you gather together with this holiday season, I hope that you find peace and merriment. That I hope your Christmas is a merry one, full of laughter and good cheer. And if I may borrow a line from a much better writer, “God bless us, everyone.” 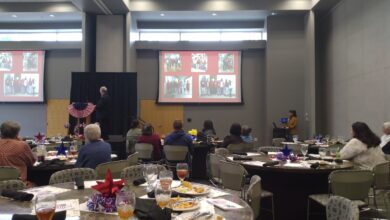 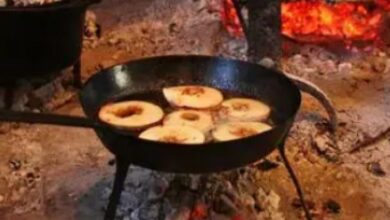 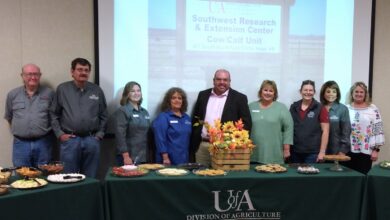 Hempstead Chamber Coffee happened this morning at offices of this week’s sponsor, the University of Arkansas Southwest Research and Experiment Center