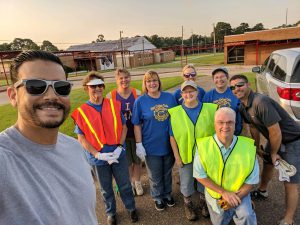 The Hope Civitan Club was joined by special out-of-town guests in picking up trash on Henry Yerger Street during the city-wide cleanup, July 27, in preparation for the Watermelon Festival.

Verizon Wireless employees from Little Rock and Hot Springs, as well as from Hope, joined the Civitans in the event, which the Civitan Club had registered with Arkansas’s Great American Clean Up Campaign.  The Hope Club was the first local organization to participate in a clean-up associated with KeepArkansasBeautiful.com, and by doing so, turned Hempstead County “green.”