The Hope Bobcats’ 45-29 win in DeQueen could not have come at a better time, since it was the first conference game of the season and the first time this year’s Bobcats (1-3) embarked on a road trip. And now Hope starts its Homecoming festivities fresh off a win.

Bobcats coach Phil Turner said his team’s effective domination of the game was a result of its experience against top-level state talent, which will benefit the team as it goes deeper into conference play. “Yes sir, most definitely our non-conference schedule gets us prepared for a competitive conference schedule. The three teams we played in non-conference compete for a state title every year.

We’re trying to get back to that level of football where we used to be. Our 5-A South Conference is tougher this year because everyone brought back a lot from last year’s teams and also added Little Rock-Parkview who was a contender in 6A last year.”

The impressive performances against DeQueen were also products of last week’s practices. Turner said, “The kids were focused and locked in last week, and it showed on the field last Friday. Tyler and Issac’s success last week started on Monday and carried through the whole week, because Tyler and his receiving group hardly dropped a ball all week. We knew we had a great chance for some big plays in the passing game, and those guys delivered along with Kaleo Anderson and Tristan Young. I’m so proud of them all.”

As for the defense, last week began with a call for improvement against opponents’ ground games. “We challenged our defense on Sunday, because we have been giving up a lot of yards on the ground and, for us to be successful, we have to stop their running game and make them a passing team, and the guys delivered and made some bone crushing hits out there last Friday,” Turner said.

In Friday’s Homecoming game, Hope hosts the Hot Springs Trojans (2-2) a team who returns 15 seniors and who had a big win of its own in its most recent game, a September 16 romp over Little Rock Southwest. This followed a 29-28 loss to Arkadelphia. “Hot Springs is very well-coached, very long and athletic and loves the big plays in the passing game,” Turner said. “For us to come out with a win on Friday night we have to get pressure on their young quarterback and limit the big plays and we have to execute offensively.”

Hope will have its Pep Rally and Coronation at 2:00 p.m. Friday at Hammons Stadium.

Those taking part in the homecoming ceremony will need to line up at the stadium at 6:00 p.m.

The Pre-game Homecoming ceremony will start at 6:30 p.m.

Kick4Cash will take place at halftime. 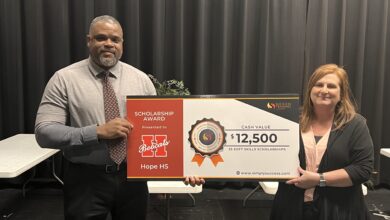