The Hope High Class of 2022 was graduated earlier tonight in a ceremony that occurred on the field of Hammonds Stadium under bright sun and few clouds.

After the Hope High band played the gowned graduates-to-be to their seats with the trio of Edward Elgar’s Pomp and Circumstance March No.1, the school’s principal Donald Patton welcomed them and an audience that easily filled the west bleachers and spilled over into the band stand, along the fences and over to the east bleachers.

Opening remarks were delivered by Hope Schools Superintendent Jonathan Crossley. After Patton spoke again to introduce the honors graduates, the Honor Graduate speaker, Shakira Arnett, chosen by teachers, gave a message of inspiration to her classmates.

Ware’s speech was followed by the presentation of diplomas to 152 seniors by Lekia Jones, Assistant Principal at HHS.

A rendition of the Hope High School Alma Mater by the band followed.

Patton then told the new graduates they could move their tassel from the right to the left side of their mortarboards. Many then threw them airward just before marching out during the second playing of the march.

Stay tuned to SWARK.Today for the full story in our special print Graduation Edition. 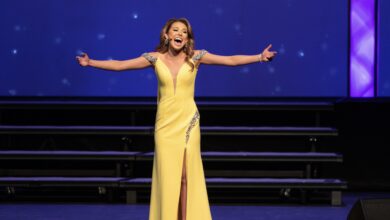