HOPE – The threat of COVID-19 reared its head to sideline seven Hope Bobcat starters against perineal rival Prescott here Sept. 17 and give the Cats an opportunity for leadership to emerge elsewhere despite a 49-13 loss.

“The scoreboard did not show it, but we had some bright spots,” Bobcat Head Coach Phillip Turner said. “We had some of our most experienced starters out, but we had others who stepped up.”

Reserve Quarterback Tyler Patterson, a sophomore, got his first start and complete game of the season in place of Bobcat field general senior Amorrion Dempsey.

Patterson got cranked up in the second quarter as Hope sat third and six on the Bobcat 38-yard line. Throwing to the right side, he hit senior KeJuan Booker who threaded the seam along the sideline to the Prescott 15-yard line. But the Cats were not able to turn the yardage into points.

Hope threatened, again, at third and seven from the Bobcat 36-yard line as Patterson passed to the opposite side to connect with sophomore Isaac Love for a burst to the Curley Wolf 49-yard line.

Patterson later hit paydirt on second and ten at the Prescott 29-yard line with a bullet over the middle into the arms of sophomore Kelston Mask who evaded defenders and cut across the field untouched for the score. The point after by sophomore Juan Ortiz was good.

The Bobcats struck in the waning seconds of the game on second and three from the Prescott 20-yard line as Patterson handed off to sophomore Tamorrion Lindsey and the Bobcat line put up a wall that allowed Lindsey to evade the rush and dash into the end zone for the touchdown.

Patterson was 7/20 passing on the night for 125 yards, no interceptions and one touchdown, while the Cats ran for only 66 yards against a quick Curley Wolf defense.

The Bobcats forced two Prescott fumbles, recovering one as Curley Wolf Quarterback Carston Poole bobbled a high snap from center and missed the hand-off on first and ten at the Prescott 35-yard line. But, the Cats were unable to capitalize on the miscue.

Hope fumbled once and lost the ball while converting only 3/11 on third down.

Prescott threw for 167 yards without interceptions and ran for 232 yards to total 399 yards for the game.

Prescott put up 23 points in the first quarter and 26 points in the second quarter totaling 49 for the night, while Hope scored in the second and fourth quarters for 13 points. The second half was played with a continuously live game clock under the scoring rule.

Hope hosts DeQueen at Homecoming at Hammons Stadium on Sept. 24. The winless Leopards are rebuilding from an extended losing streak, and will operate from the shotgun on offense with a run-oriented game and a 4-2-5 defense utilizing limited returning experience. 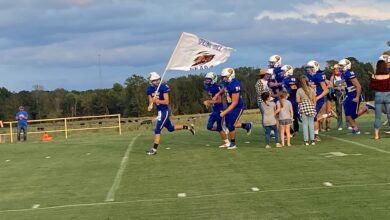 The Letter “C” is for Campfire