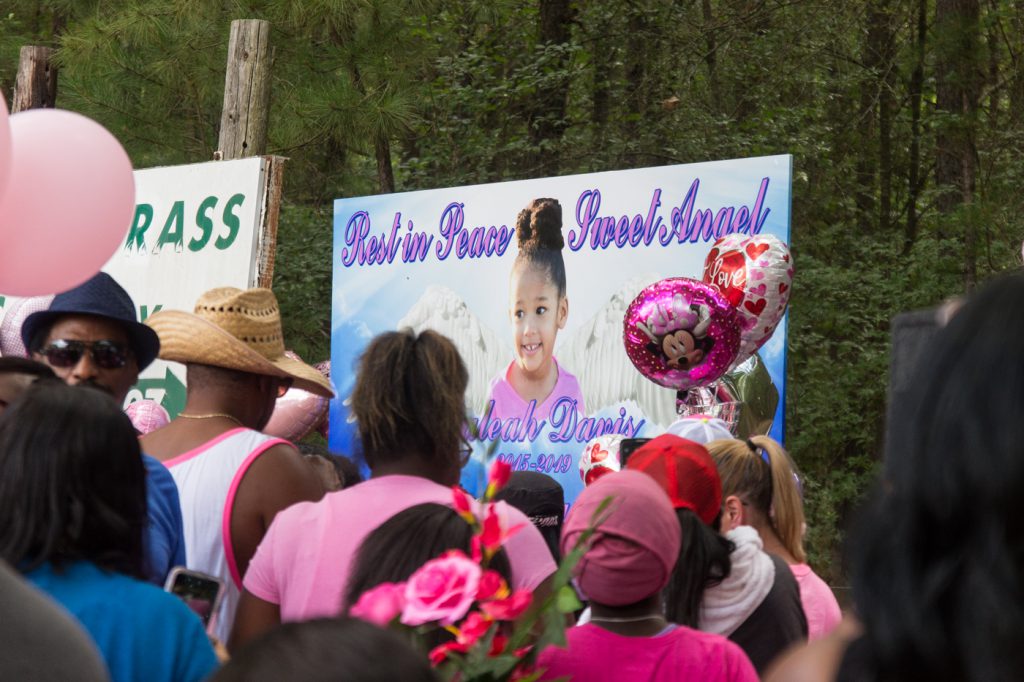 The mood was somber among the large crowd gathered in the early summer sunshine at Red River Truck Stop Saturday morning as they prepared to walk together across the bridge spanning I-30 and to the location where the memorial service in honor of 4-year-old Maleah Davis of Houston, TX was held.

Firefighters and deputies closed down access to Hempstead County Road 1 as the hundreds who attended made their way to the entrance of the on-ramp where they gathered to hear the words of community members who came to speak about the impact the tragic end of Maleah’s life and the discovery of her remains in Hempstead County have had. A memorial along the on-ramp of I-30 East at mile marker 18 made up of toys, balloons, crosses and small statues grew steadily throughout the week as people from all over made pilgrimages to the site. All of the items were relocated to the entrance of the ramp where a sign memorializing Maleah was installed last week and unveiled during the memorial service.

Pastor Revel Kidd of Spring Hill United Methodist Church welcomed the crowd and introduced each of the speakers and singers throughout the service.

A consistent theme among them all was sorrow at how Maleah suffered and anger at how she was abused by those who should have loved and protected her, failed by those who could have helped her and then discarded as if she had no value. Some expressed how they wished they had a chance to help her and be there for her when she was still alive and encouraged the crowd to love and protect the children whose lives they can impact in a positive way and who they can protect and care for now in honor of Maleah. Pastor Kidd said that Maleah’s pain is past now, and she has her eternal home with God now through Jesus Christ who also suffered.

As songs were sung and people gathered to view the memorial for Maleah and leave mementos in honor of her, members of the crowd filled the air with bubbles and released balloons in her memory.

When the memorial concluded, much of the crowd, made up of people from all over the region, lingered and visited with each other as others began the walk back across the bridge.

The investigation continues in Houston and law enforcement is seeking justice for the senseless killing of the young child who connected our two communities in the most tragic of ways.

Some in the community are working to make sure that Maleah doesn’t fade from the community’s memory and to do everything possible to help children who are abused and suffering as she was before it’s too late.

One thing that is in the works is to name the bridge over I-30 in Fulton the Maleah Davis Memorial Bridge. Sheriff James Singleton said that Detective Jesus Coronado of the Hope Police Department brought up the idea and that the proposal is being put together to be presented to the Hempstead County Quorum Court.