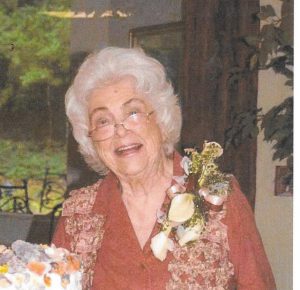 Jerry was born May 24, 1925 to Earl and Bess Cato in Spring Hill, Arkansas, and graduated from the high school there in 1943.   She married the love of her life, William (Bill) Jones on October 18, 1947, and they resided in Bodcaw, Arkansas, during the early years of their marriage, settling later in Hope for over 57 years.  She was a member of First Baptist Church in Hope where she was known to many of the children as the cookie lady.  She recently resided in Texarkana, Texas, at an independent resident facility and memory care center.

After receiving her cosmetology certification, Jerry worked at Virginia’s Beauty Shop in Hope for several years.  Jerry She was also employed as the bookkeeper at Dean’s Truck Stop and later as an administrative assistant at the Hope Housing Authority.  She was best known during her working career as a caterer in Hope and surrounding areas specializing in beautiful wedding receptions.  After retirement, Ms. Jerry and Mr. Bill, as they were known to most everybody, joined the Arkansas Baptist Association group known as Nailbenders for Jesus and Grannies on the Go, building over 117 churches all over the state of Arkansas.  Avid RVers they traveled to many states across the United States and British Columbia and frequently spent winters in south Texas where they participated in various mission activities.

Never one to be idle and blessed with an extraordinary artistic talent, Jerry enjoyed gardening, painting (winning many blue ribbons at the Hope County Fair), decorating, sewing and cooking.  Her greatest gift was hospitality so she made sure that no one left her home without enjoying a glass of Naomi tea and something good to eat.  She was never happier than when she was planning a party for her Sunday School class, the deacons, her art class, or any other group she thought would enjoy eating out in the backyard under the gazebo, surrounded by the tall pines and beautiful flower gardens that made her home so special.  Lucky was the friend that was on her Christmas brittle list. She was also an avid Razorback fan and followed both the football and basketball teams her entire life.  She made life fun for everyone around her.

The family wishes to thank the staff of the Oaks Memory Care Center and Heritage Home Health and Hospice Care for providing the best care possible to our mom in her final years.  You blessed our hearts as well as hers and became family to us all.

Funeral service will be 2:00pm on Tuesday August 13, 2019, at Brazzel/Oakcrest with Bro. Larry Byers and Bro. Daniel Bramlett officiating. Burial will follow in Memory Gardens Cemetery. Funeral arrangements are under the direction of BRAZZEL/Oakcrest The Funeral Home of Hope, Eddie Brazzel Director. Online register: www.brazzelfuneralhomes.com