Julia Watkins was born July 18, 1916, in the community of Sutton, Nevada County, Arkansas, to David Edward and Theodicia Bright Evans. She was a
mother and homemaker, the oldest member of Garrett Memorial Baptist
Church (nearing eighty years) and a fifty-year member of the Order of
the Eastern Star.

In passing, “Mrs. Julia” wished a final and fond farewell to her many
surviving special friends everywhere; and her friends and residents and
the wonderful staff of Hope Haven Retirement Facility.

A memorial service will be held at 1:00 p.m. on Friday, January 24, at
Herndon-Fuqua Funeral Home in Hope; a reception will follow
immediately at Herndon-Fuqua. A private burial service for family and
relatives will be held later in the afternoon at Rose Hill Cemetery in Hope.

At “Mrs. Julia’s” request, memorials may be made to Garrett Memorial
Baptist Church, P. O. Box 223, Hope, Arkansas 71801, or to a charity of
one’s preference. 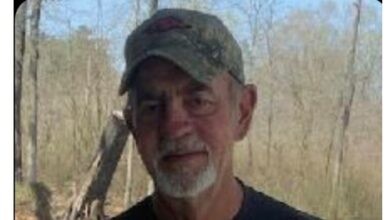