TOKYO – Racing in the semi-final of the 400m hurdles in the Tokyo Olympics on Sunday, Arkansas alum Kemar Mowatt, representing Jamaica, finished fifth in the first of three heats with a time of 48.95 seconds.

Competing next among Razorback alums in Tokyo are Sandi Morris and Tina Sutej in the qualifying round of the pole vault on Monday. They are both competing in qualifying group A and a dedicated live stream of the event will be available starting at 5:20 a.m. CT (https://bit.ly/3zXfo5F).

The top two finishers in each of the three heats of the 400m hurdles advanced to the final along with the next two fastest times. Mowatt placed 14th overall among the 24 entrants in the semi-final round.

It was a tough task to claim one of the top two positions in the heat Mowatt drew. The world record holder, Norway’s Karsten Warholm, was stationed in lane 7 while U.S. champion Rai Benjamin, third fastest ever in the event, occupied lane 5 with Mowatt out in lane 9.

Warholm claimed the heat in 47.30, the fastest time overall in the semi-final round while Benjamin clocked 47.37 as runner-up, the third best time in the semi-final. Turkey’s Yasmani Copello finished third (47.88) in the heat and advanced to the final on time.

The other pair of Jamaican hurdlers who advanced to the semi-final included Shawn Rowe and Jaheel Hyde. Rowe placed sixth in the second heat with a career best time of 48.83 that placed him 13th overall. Hyde hit the eighth hurdle and fell in the third heat.

Arkansas alum Sparkle McKnight, representing Trinidad & Tobago, was scheduled to race in the first round of the women’s 400m hurdles on Saturday in Tokyo, but didn’t compete after testing positive for covid.

U.S. Olympic Trials champion Katie Nageotte, the current world leader at 16-2 ¾ (4.95), is also in group A with Morris and Sutej.

Competing in Doha during a Diamond League meet in late May, Morris and Sutej produced their outdoor best marks for this season, placing second and fourth, respectively. 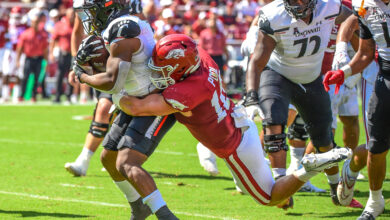