FAYETTEVILLE – Like champagne, Nick Starkel strives finishing with a kick.

Quarterbacking  Arkansas possessions finished by kicking a PAT  is Plan A and a field goal Plan B.

“He’s got to protect the football better and he knows that,” Morris said. “Not every ball’s going to be a touchdown pass. We want every drive to end with a kick. And if it’s a punt there’s nothing wrong with that.”

With an open date week plus these game week practices since Arkansas last played Sept. 28 in the 31-27 closely contested SEC West loss to three-touchdown favorite Texas A&M, Starkel has had plenty of time for Morris’ message taking hold.

It was reinforced by A&M picking off Starkel’s shovel pass and injuring his elbow as he tried to make the tackle.

“I’ve got to do a better job of throwing the ball away or hold onto it and just run out there,” Starkel said. “Every possession has got to end with a kick. That’s something we’ve really stressed this week.”

Ironically a graduate transfer via Texas A&M, Starkel said his elbow  injury, finishing him against A&M just before halftime, has healed. He practiced every practice last week and this week.

Meanwhile via SMU graduate transfer Ben Hicks a record-setting starting quarterback for Morris at SMU in 2016 and 2017 but ineffectual starting Arkansas’ first two games of 2019, played superbly relieving Starkel against  the Aggies. Hicks completed 15 of 27 for 181 yards and touchdown without an interception.

“He did a great job,” Starkel said. “I came up to him after the game and I said ‘Hey, I’ve got a lot of respect for you and just what you did out there today.”So it seems Morris feels the best about his quarterbacks than any time this season.

Smith didn’t practice during Kentucky’s open date week last week. Despite Smith deeming himself healed, Stoops has said little about Smith’s health this week other than he’s “out there” along with so far unused sophomore squadman Walter Wood and the intriguing Lynn Bowden, Kentucky’s most explosive player as its leading receiver, punt returner and kick returner, and best rushing average, 7.6 on 13 carries for  99 yards, Bowden has taken direct snaps in the Wildcats’ Wildcat formation. He’s completed 3 of 4 passes, one for 32 yards, and as an ex-high school quarterback has quarterbacked in recent practices.

Morris said he expects Stoops  quarterbacking  both Smith and Bowden and  warns  not deeming Bowden a run-only QB.

“Obviously he’s just electric with his ability to run the football,” Morris said. ‘As a quarterback in high school you can’t go to sleep on his passing game.”

Arkansas’ offensive line does not appear full strength. Senior left offensive tackle Colton Jackson of  Conway, sorely missed against San Jose State when sidelined in concussion protocol, suffered a similar injury against Texas A&M and likely won’t play against Kentucky.Also starting center Ty Clary has only practiced on a limited basis since his concussion protocol post A&M.Somebody in Lexington  is going to break an SEC 0-fer.

Oddsmakers pick the home team by a touchdown. 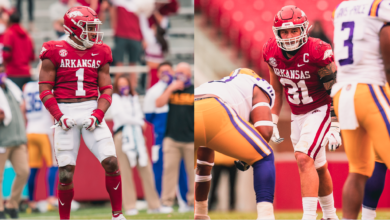