A Ouachita County man was shot and wounded by a local sheriff’s deputy yesterday after the suspect in a domestic disturbance reportedly raised a shotgun he was holding and aimed it at the deputy. The Arkansas State Police has been requested to investigate the incident.

About 1:45 AM (Sunday, September 26th) two Ouachita County deputies were dispatched to a domestic disturbance at 3540 Arkansas Highway 376 south of Camden. The deputies began searching a wooded area near the residence for John Wesley Williams, 47, who had fled the home where he resided with two females.

During the search Williams allegedly fired the shotgun twice as the deputies moved closer. When Williams was located in thick underbrush, he was ordered by the deputies to drop the gun. Williams reportedly ignored the command and pointed the gun at one of the deputies who fired his service weapon striking Williams.

Williams was transported by ambulance to a local hospital with a non-life threatening wound.

Special Agents of the Arkansas State Police Criminal Investigation Division are preparing an investigative case file which will be submitted to the Ouachita County prosecuting attorney who will decide whether the use of deadly force by a law enforcement officer was consistent with Arkansas laws.

Questions relating to the identity of the deputies and their current administrative should be directed to the Ouachita County Sheriff’s Department. 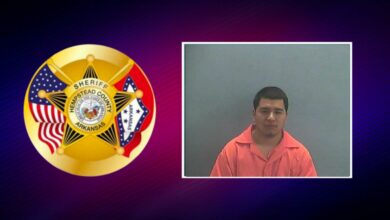