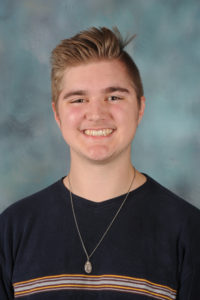 ARKADELPHIA, Ark.—Ouachita Baptist University’s Cross Brandon, a sophomore instrumental music education major from Little Rock, Ark., was one of 10 participants from around the country selected to study in the Broadway Winds intensive program this summer in New York. The program, held July 14-18, was hosted by New York University Steinhardt’s Department of Music and Performing Arts Professions.

Broadway Winds brings together advanced high school- and college-level woodwind players from New York and across the nation to work directly with professionals in the Broadway industry. The five-day program allows students to perform, study and collaborate with NYU faculty and Broadway instrumentalists who have dedicated their careers to the art of woodwind doubling – playing more than one instrument – as the industry requires the ability to perform a variety of musical styles.

“This was a phenomenal opportunity for Cross to experience life as a working pit musician for Broadway musicals and to study with current professionals in New York,” saidDr. Caroline Taylor, professor of music at Ouachita. “Broadway Winds is a highly competitive program that requires students to master playing flute, clarinet, saxophone, oboe and bassoon all equally well.”

To be considered for the program, Brandon submitted video excerpts of himself performing on various woodwind instruments, reflecting his musical proficiency and versatility. While studying at Broadway Winds, Brandon attended masterclasses covering woodwind orchestration, paths to a successful career and equipment for doublers.

“I brought my tenor saxophone, soprano clarinet, flute and piccolo because, in the pit business, there is rarely a time when a woodwind part in a musical calls for only one instrument,” he said. “That’s why it is important for a woodwind player to be able to play multiple woodwinds in order to succeed.”

Brandon also had the opportunity to attend a Broadway musical with his peers, as well as sit in the pit of Disney’s “Aladdin – The Musical” and read the sheet music along with the woodwinds.

“I met various musicians and had an amazing time,” he said. “Everyone sounded incredible!”

With ambitions to eventually work on Broadway, Brandon said his experience “provided so much information and knowledge about the business and really inspired me to work harder.”

“I just would like to personally thank Dr. Caroline Taylor, Dr. Craig Hamilton, Ms. Alexis Szcepanik and others for putting their all into my education,” he noted. “I have shared my dreams to be on Broadway with my Ouachita professors, and they have worked with me by providing as much support and knowledge as they can on topics like show gigs, how to make connections and how to perform on multiple instruments.”

For more information or to learn more about Ouachita’s School of Fine Arts, contact Dr. Caroline Taylor at (870) 245-5139 or taylorc@obu.edu.