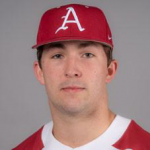 It works even better, Van Horn admitted at his Monday season wrapup press conference, that after a 2018-2019 UA  freshman year playing both sports, Noland recently announced he’s pared his dedication to baseball.

A pitcher-quarterback can accomplish both, Razorbacks tight ends coach Barry Lunney lettered in the 1990s both for retired baseball coach Norm DeBriyn and former Razorbacks football coaches Joe Kines and Danny Ford, but it’s not easy.

It wasn’t for Lunney. And it likely would have been tough for Noland though he certainly accomplished much. In his lone Razorback football start, Noland quarterbacked the  23-0 victory over Tulsa, the only victory over a Division I school for the 2-10 besetting Coach Chad Morris in his first Razorbacks season last fall.

For baseball, Noland’s 3-5 record and 4.02 ERA belies his importance.  Noland  with fellow freshman Patrick Wicklander varied the No. 2 and No. 3 starters behind 12-1 junior Isaiah Campbell on a Razorbacks team that went 46-20, shared the SEC West championship with Mississippi State and advanced all the way to the College World Series for the second consecutive year.

But devoting full-time to baseball ought to improve Noland immensely devoting a fall and winter offseason entirely to throwing baseballs instead of footballs.

“Yeah it’s different, and not as much for  a hitter-fielder, compared to a pitcher,” Van Horn said. “Even if Connor was a receiver it wouldn’t  be as different.  It’s a little different arm action football to  baseball. Because I’ve seen guys that were really good pitchers in high school that also played quarterback in high school. As sophomores they might have been throwing in the upper 80s and by the time they’re seniors, they’re throwing 85-84 and they went on and played football.”

“Tyler Wilson was a guy that, I loved him as a pitcher,”  Van Horn said. “He came to our camp as a sophomore throwing the ball pretty good. Then I looked up his senior year — talking to scouts because we didn’t see him play much because we knew he was gonna play football —  and they said his velocity was down. You’re talking 7 on 7 in the summer. Throwing the football in the fall, summer, spring ball. It’s hard for those kids at that position to really excel. A lot of the quarterbacks that we recruit, they also play shortstop or center field and then they get here and that’s all they do and you see a big jump  maybe in their arm strength.”

Van Horn and pitching coach Matt Hobbs immediately saw “something special” in Noland to promote him so fast into the weekend SEC rotation.

“I think with Connor everything’s good there,” Van Horn  said.  “He’s physical. He’s smart. He’s got good mechanics. If he stays healthy he’ll have a really good spring in ’20.”

The best part, Noland himself, Noland said, and Van Horn and Morris back his words, chose which sport fork to take.

This time last year Internet message boards swarmed with Razorbacks fans declaring Noland, though he had never taken a collegiate snap, be the Arkansas quarterback and concentrate on football.

Then he pitched well in February and by early March many of the same folks proclaimed he should forsake football for baseball.

All could conjecture all they want but it’s really none of their business but Connor’s to choose between his two callings or continue doing both which he obviously excelled doing at Greenwood.

“It was Connor’s call, 100 percent, and his family,” Van Horn said. “I’m no football coach so I can’t really tell you how to evaluate that (from the football standpoint). I just know on the baseball side of it, if he goes full-time baseball and he’s just only throwing a baseball and he’s lifting with baseball and doing baseball work, long toss, just everything that goes into pitching. I really believe his velocity is going to go up, two and three miles an hour for next year.”

So perhaps this year’s good becomes next year’s great.

“This year he pitched consistently anywhere from 88 to 91, maybe a 92 and he even touched 93 here and there,” Van Horn said But I think he’ll start pitching, he won’t ever go out of the 90s unless he wants to or is getting tired. “

Extra velocity would help Noland with more than his fast ball.

“If can get that thing up there to around 93, 94, 95 a little more consistently,” Van Horn said, and  with his off-speed stuff — he’s got a good changeup and slider and a curveball — that would be a huge difference  to have four weapons like that with that velocity on that end. So I think for his future, with baseball anyway, it’s probably going to be a really good move.”

Hogs drop close one at Baylor