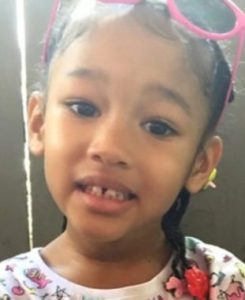 UPDATE: 6-3-2019-1255 p.m.::: According to the Houston Police, Harris County Medical Examiner’s Office identified Maleah Davis as the child found Friday in Fulton along the I-30 18 mm on ramp.  Houston Homicide’s work continues as they work to put together the case and bring charges against anyone they find who was involved with the killing of 4-year-old Maleah and the cover-up of the crime against the small child.

UPDATE:: 6-1-2019; 8:20 a.m.:: The sun had set as law enforcement finished their work at the scene in Hempstead County, AR, where the remains of a small child were found Friday afternoon. According to Sheriff James Singleton, once Arkansas State Police finished the 3D mapping of the crime scene, Hempstead County Coroner David Peters was brought into the scene to collect the remains. Sheriff Singleton said the remains were turned over to Houston Police Homicide Detectives who flew them to Houston where medical examiners will test to determine if the remains are those of 4-year-old Maleah Davis and the cause of the child’s death. Due to the circumstances, information and what was located, Houston Homicide Commander Michael Skillern said Friday that they are confident that the remains are those of Maleah and they expect that the medical examiner will confirm that conclusion.

Houston Police Homicide Detectives are confident that the body of a child found on the I-30 on-ramp at mile marker 18 is the body of 4-year-old Maleah Davis, of Houston, who has been missing for almost a month.

According to the Houston Police Department, Maleah Davis was reported missing on May 4.  Houston Homicide Commander Michael Skillern that Maleah’s stepfather, Derion Vence, initially gave a story about him, his son and Maleah being kidnapped but investigators doubted his account early on. Skillern said that video evidence they obtained led them to believe that Maleah had been killed and resulted in the arrest of Vence on May 11  for tampering with evidence, specifically Maleah’s body.

Homicide Commander Skillern said that on the morning of Friday, May 31, Houston civil rights advocate Quanell X contacted Houston PD and told them that he spoke with Vence and Vence told him that he had dumped Maleah’s body in Arkansas, near Hope. Intitial sources indicated that the body may have been dumped around two weeks ago but Skillern said that they believe the body was probably dumped the day after Maleah was last seen.

Houston Police began contacting law enforcement agencies in the area late Friday morning and notified them they had reason to believe that Maleah’s body was dumped in Hempstead County along I-30 near Hope. The Hempstead County Sheriff’s Office, Hope Police Department, Arkansas State Police, Arkansas Game & Fish and FBI began searching along the interstate with the heaviest initial concentration along Exit 30 at Hope. Officers searched the area for about twenty minutes before getting information that a mowing contractor cutting the grass along the I-30 East on-ramp in Fulton had located a black garbage bag that was emitting a foul odor.

Officers quickly scrambled to their vehicles and got on I-30 west to Fulton. The on-ramp was shut down and police line put up to cordon off the scene. Arkansas State Police CID began the long task of processing the crime scene. No confirmation of what law enforcement found was initially available but all searches were suspended and all attention was turned to the short stretch of road entering the interstate in Fulton. Homicide Detectives from the Houston Police Department arrived on scene and were shown what had been discovered.

Hempstead County Sheriff James Singleton was eventually able to confirm that human remains were located in the garbage bag and Houston Homicide Commander Michael Skillern confirmed that the remains are of a child. Skillern said that they are confident that the remains are Maleah but that the State Police CID will have to conclude their work on the scene and the body be sent to the medical examiner for confirmation to be made.

Investigators continue their work into the night and it will be some time before confirmation of the identity of the remains to be made.

We will update as more information becomes available.