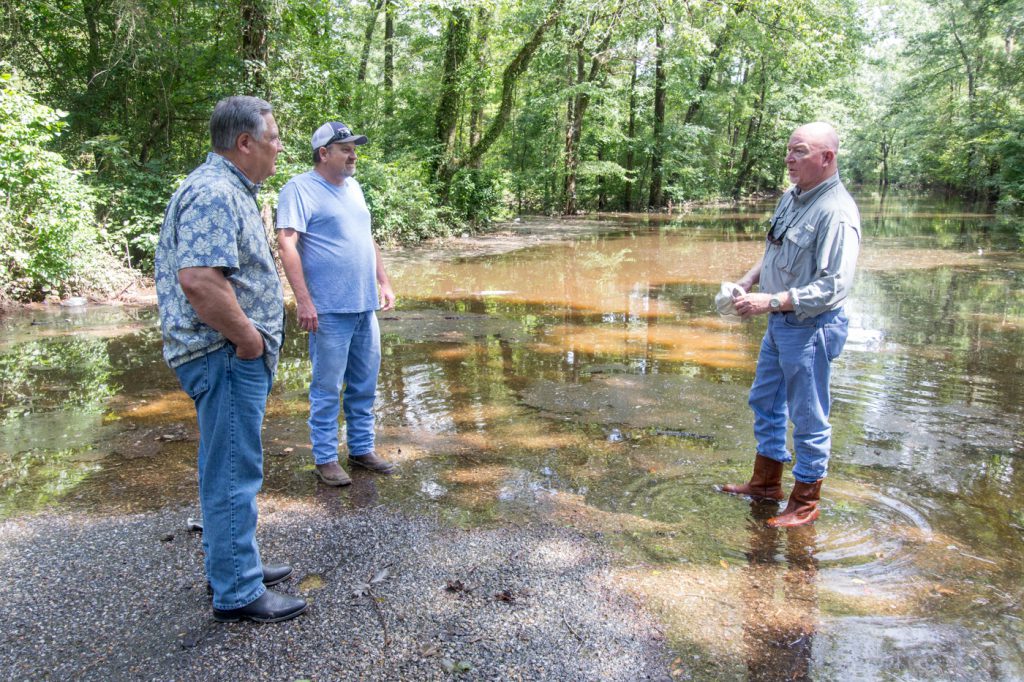 Representative Watson said he wanted to get a first-hand look at the damage caused from the flooding and see the progress county road crews are making in getting the roads passable again. Watson said that every avenue possible is being pursued to get assistance for the area and he wanted to have the first-hand perspective of what his constituents are dealing with when discussing the issue with those who will decide what money will be available to give relief to the counties.

The flooding of the Little Missouri River and its tributaries resulted in temporary closures of county roads and highways throughout Hempstead, Howard, Pike, Nevada and Clark Counties, including areas of I-30, which were under water and sustained damage. Road Superintendent Kidd said that around 30 county roads in Hempstead County were initially closed but they are making good progress in getting roads passable enough to open. Kidd said he and his crew have several weeks of work ahead of them to deal with the mess left for them in the wake of the flood.

Judge Crane said that all road crew employees have been working overtime to get roads passable as quickly as possible. The road crews, which normally work ten-hour days Monday-Thursday, are now working 12-hour days and working Fridays while they deal with the aftermath.

While the waters have receded in many of the areas initially flooded as a result of heavy rains, which dumped as much as 16 inches of rain in some areas, some areas remain under water. So, a complete assessment of damage will be delayed but Hempstead County Judge Jerry Crane said that the Office of Emergency Management will be working with the county to put a dollar amount as the county seeks disaster relief. 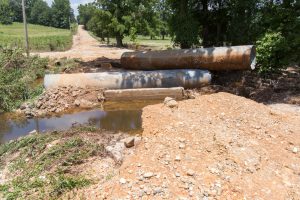 During the tour, Kidd took Representative Watson and Judge Crane to several areas around Blevins and Nashville where signs of the massive volume of water were clearly visible. The grass in fields in low-lying areas were pressed over by the water flow, barbed wire fences were covered in vegetation washed onto them by deep, flowing water and large amounts of rock from the gravel roads were washed 30 yards or more out into pastures. Representative Watson commented that it looked as if someone was purposefully laying out a gravel parking lot in some areas. Five-foot culverts that once served to allow water to flow under roadways were washed 100 feet down stream and areas of creeks which were once just dirt and clay have white stone banks due to the amount of rock washed into them from the roadbed. Some roads remain under several feet of water and still present a hazard to motorists.

While the signs of destruction were obvious, another thing that was very noticeable as Watson, Crane and Kidd toured the area is how much has already been done by road crews to repair the roads and all, according to Superintendent Kidd, without hauling in one load of gravel or stone. Kidd said that crews have been going through with heavy equipment and reclaiming as much of the rock that was washed into ditches, fields and forests back into the roadbed. By using what was washed away, crews are helping to reduce expenses to the county for the repairs. 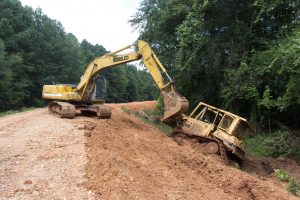 Judge Crane and Representative Watson both encouraged the public to be as patient as possible as work continues to restore roadways. Representative Watson said, “A lot of headway, as we saw today, has been made…and behind the scenes are going fast.” Watson also encouraged the public to be cautious in areas that were impacted by the flood. Roads that are passable still have hazards that can cause damage to vehicles or crashes. One county sanitation truck was overturned in about 6’ of water Thursday evening, shortly after Representative Watson’s tour, while the crew, who both escaped the truck safely, were attempting to carry out their work in the area. “We’re all working as fast as we can and I promise you I am going to do everything I can on my end.”, Watson said. Watson said that the area will get assistance from the state and potentially other sources depending on the assessment from the OEM.

Judge Crane said, “We want to thank the people for being patient with us.” Judge Crane said the county road crews have been dealing with flooding for several months before the flood hit this week. Previous flooding this year had already caused previous damage to roads, culverts and bridges and that the county has been working to repair. Judge Crane said that with the extra overtime the crews area working, they are progressing as fast as possible. He said that the main concern of he and the crews is the safety of the public and they are doing everything they can to make the roads safe for them to travel again.