Among the attendees of the Watermelon Festival on Day Three were several state and local incumbent politicians and candidates for office. Not least among them was Sarah Huckabee Sanders whose campaign bus was a bright watermelon-flesh red alongside the Cricket Wireless stage.

Sanders’ husband Bryan Sanders was her champion, taking second place during the Politically Correct Watermelon Eating contest on stage as his wife, the Republican nominee for governor, looked on. After the contest ended, the candidate met up with supporters, posed for pictures and answered questions.

Asked to assess her husband’s performance in the contest, nominee Sanders was all compliments. “I thought he did fantastic, really proud of him. And I think he by far had the best cheering section which we’re pretty excited about. So I thought he did a great job,” she said.

About the Watermelon Festival itself, candidate Sanders said, when asked if she had fond memories of attending past festivals here. “Absolutely. Not only memories, but lots of pictures. It’s kind of like reliving my childhood a bit. I’ve even still got a few Hope watermelon t-shirts lingering around that my kids sleep in now. My grandparents both lived about five minutes from here, so we spent a lot of time at the festival in the fairgrounds.”

When asked if any particular past event stood out for her, Sanders brought the conversation to the present. “I’m hoping it’s celebrating my 40th birthday, and 40 been my best year yet,” she said.

During the auctioning of the three largest watermelons received at the weigh-in, Huckabee Sanders made her entrance as the largest one, grown by Bodcaw’s Dylan Kilgore, was being sold. She bought it, and then took photos with Dylan and his family. 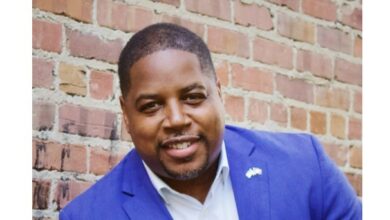