“To score as many points as we did in this meet I thought is exceptional,” Harter said. “And winning another triple crown is nice.”

Razorbacks Lexi Jacobus and Tori Hoggard vaulted Friday’s 14-3 1-2  but on fewest misses were second and third to Vanderbilt’s Kristin Denk.

“Janeek Brown reiterated she’s leading the world,” Harter said. “And Payton’s time (a personal record) is exceptional. Keithlin Campbell, I had her for fourth and she ends up winning it and beating big-time people. Our distance people and sprinters, they just kept coming one after the other after the other. And we had some nice  breakthroughs with some of our younger people as well.”

Aside from Boit for Bucknam’s Razorbacks, Cameron Griffith’s second  (3:48.88) in the 1,500 meters placed highest individually.

Griffith came back for third with teammate Matt Young fourth in the 5,000 accounting for 21 Razorbacks team points.

Senior Razorback Gabe Moore led the men’s  2 -day decathlon Thursday and Friday until feeling his hamstring pull during the pole vault, the eighth of the decathlon’s 10 events.

Kieran Taylor and Hunter Woodhall earn All-SEC recognition and five team points each for Bucknam’s Razorbacks with fourth places in the 800-meter run and 400-meter dash. 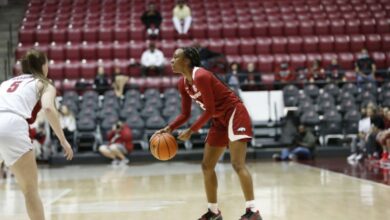 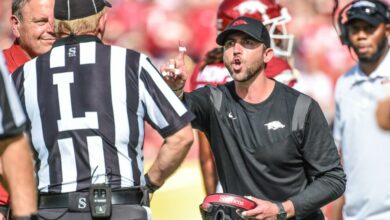