The Deborah Sampson Act, bipartisan legislation introduced by Boozman and Sen. Jon Tester (D-MT), was included in the comprehensive veterans package. The Boozman-Tester language will eliminate barriers to care and services that many women veterans face and help ensure the VA can address the needs of women veterans who are more likely to face homelessness, unemployment and go without needed health care.

“VA facilities need to be updated to accommodate the growing number of women veterans so we can meet their needs. Ensuring the VA has the capability to provide more equitable care and services is key to fulfilling our promise. Passage of this bill will enable us to better support women who answer the call to serve their nation in uniform,” Boozman said.

“This is a groundbreaking moment as we push VA to provide better access to care and services for the nearly two million living women veterans across the country,” said Ranking Member Tester. “Women have served in uniform since the American Revolution and are now the fastest growing population of veterans in the country. It’s our responsibility to make sure VA health care and benefits are tailored to meet their needs and are accessible to them and their families. Unanimous passage of our Deborah Sampson Act sends a clear message to women veterans—and the American public—that Congress is willing to come together to do what’s necessary and follow through on this sacred duty.”

There are 19,000 women veterans in Arkansas. According to VA data, women comprise 10 percent of the veteran population. That number is expected to increase to more than 16 percent within the next 25 years.

The senators first introduced the legislation in 2017. Their bill garnered support from leading Veteran Service Organizations including the Veterans of Foreign Wars (VFW), Iraq and Afghanistan Veterans of America (IAVA) and the Disabled American Veterans (DAV).

Additional Boozman-authored and championed provisions approved by the Senate in the Johnny Isakson and David P. Roe, M.D. Veterans Health Care and Benefits Improvements Act of 2020 include: 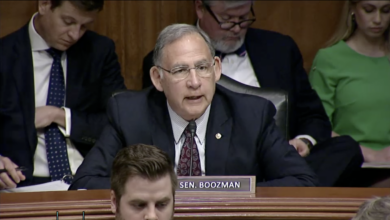