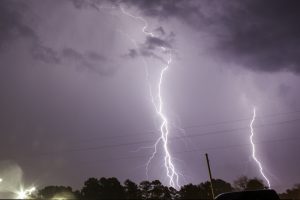 The National Weather Service (NWS) is advising that a low-pressure system is expected to move through the area beginning tonight, bringing increased thunderstorms and a potential tornado outbreak with severe thunderstorms likely.

The NWS said thunderstorms will gradually increase in coverage late Friday night. A few storms could be severe, especially along and north of I-20 in east Texas, extreme northwest Louisiana, extreme southwest Arkansas and southeast Oklahoma. Large hail will be the biggest threat. Locally heavy rain may also lead to isolated flash flooding.

Saturday, the NWS said, large hail and damaging winds will be the primary threats during the morning hours, mainly north of Interstate 20, ahead of a northward moving warm front.

By late Saturday morning into the afternoon, most of the Four-States Region will be within the warm sector. Multiple rounds of severe thunderstorms are expected. Tornadoes, damaging winds, large hail and locally heavy rainfall will be possible.

In far east Texas, southern Arkansas and northern Louisiana, a few of the tornadoes may be strong, long-tracked tornadoes.Rainfall amounts of one to three inches are likely, which may lead to isolated flooding.

More thunderstorms are possible late Tuesday through early Thursday. Some of these storms may be strong to severe Wednesday and Wednesday night. In addition, heavy rainfall may lead to a renewed threat for flooding.