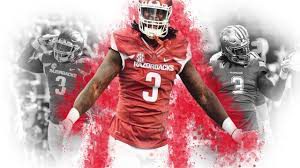 FAYETTEVILLE – On July 17 in Hoover, Ala., McTelvin “Sosa” Agim became the first player bringing a doll to SEC Football Media Days.
Suffice nobody teased Agim for bringing a doll. The alum of both Hope High School and the University of Arkansas starts his final season of Razorbacks football eligibility as a 6-3, 296 defensive tackle.
The Chucky doll replicating the Chucky of the horror movie honors John Neal, Agim’s late cousin from Texarkana, Texas.
“This Chucky doll represents my cousin who was murdered,” Agim said. “I take him for the most part everywhere with me. So it’s like he’s still here. He can always see the game. It’s basically keeping him in my life.”
Whatever can help Agim cope with the death of his cousin, the gunshot victim of an unsolved murder in Texarkana, certainly is appropriate.
“He basically went missing and the next day he was found in the back of the car and the car was on fire,” Agim said.
Obviously the still indelible impact of his cousin’s March, 2018, death dwarfs the importance of any football game, but Agim, even on a Razorbacks team floundering 2-10 overall and 0-8 in the SEC last year, played inspired football last season. Playing both defensive tackle and defensive end and lettering for the third consecutive year since reporting to the UA in January, 2016 as a December, 2015 Hope High graduate, Agim last season registered 45 tackles including a team high 10 tackles for losses for a team leading minus 44 yards. Agim posted 4.5, quarterback sacks, was credited with a team high 11 quarterback hurries and forced three fumbles, recovered one and broke up a pass.
Doing all that with his sports management degree in hand since December, “He’s a graduate with a 4.0 last semester,” Arkansas Coach Chad Morris said in Hoover, had Morris and defensive coordinator John Chavis obviously pleased that Agim returned for his senior year rather than turn pro in the 2019 NFL spring draft.
But Agim also said that Morris spoke directly that if Agim returned, Agim would be totally expected to improve his game and heed his coaches
The heeding included becoming strictly a defensive tackle.
“It was basically straightforward,” Morris said. “He said ‘If you’re not going to buy in, you should go ahead and go. And if you feel this is not your position and you’re not going to be a leader on this team, you should just go ahead and go to the NFL and cash in.’ I felt like I could be a leader on this team, buy into the position, buy into the weight gain (up 17 pounds to 296). So I came back.”
With a vengeance. Last spring the Razorbacks’ offensive line found Agim virtually unblockable.
“ I think our offensive line did a tremendous job and they are well coached,” Chavis said. “But Sosa really understands that, ‘Hey, my time is almost over here. And I’ve got to put my best foot forward.’ And I think he’s doing that.”
Asked what specific areas where the bigger Sosa got better, redshirt freshman offensive lineman Noah Gatlin laughed aloud.
““What does Sosa not do is a better question,” Gatlin said. “He is hard to block and now he is so big and athletic that he can really do anything, especially in the pass game. He is something else in the pass game. If you leave him one-on-one, he is hard to block.”
Defensive ends generally are viewed as the premier pass-rushers coming off the edges.
However Agim’s quickness inside gives him the pass-rushing edge against the guards and centers generally not as athletic as the offensive tackles.
“Not that he couldn’t play outside, but in this (4-3) scheme inside is where he should play,” Chavis said. “He should be a 3-technique. We played him some outside last year because we didn’t know if we were going to have a defensive end period.”
The 2018 midseason emergence of junior college transfer defensive end Dorian Gerald, returned now as an established 2019 senior starter, and the signing of precocious 2019 freshman defensive end Mateo Soli plus returning senior end Gabe Richardson and letterman Jamario Bell freed Agim moving inside.
Agim said he required no persuasion taking the inside track that he and Chavis believe will become his lucrative NFL ticket.
“They didn’t have to convince me at all,” Agim said. “That was one of the things …. (when he pondered turning pro) if I come back I wanted to play inside.”

Hogs drop close one at Baylor