LITTLE ROCK – The new year is an election year, and thanks to legislation approved during the regular session earlier this year, the primaries in Arkansas will take place on Tuesday, March 3.

So as not to mix electoral politics with governing, Act 545 also moved the starting date for the 2020 fiscal session. Usually, in even-numbered years our fiscal sessions begin on the second Monday in February. Now, in years with a presidential primary on the ballot, the fiscal sessions will begin the second Wednesday in April.

Another change in election law will affect organizations that want to place issues on the ballot, such as proposed constitutional amendments or initiated acts. In the past, those groups would get approval of the ballot title from the state attorney general, who would make sure that the ballot title accurately reflected the contents of the measure.

Under Act 376 of 2019, the state Board of Election Commissioners will replace the attorney general’s office as the entity that approves ballot titles. Advocacy groups will submit lists of signatures to the Board at the same time as they submit a proposed ballot title. If the Board rejects either the ballot title or the sufficiency of signatures, appeals to the state Supreme Court will be extradited.

Act 376 increases the criminal penalties for petition fraud, changing it from a Class A misdemeanor to a Class D felony.

At least three issues will be on the November general election ballot because they were referred by the legislature during the 2019 regular session. All three are proposed constitutional amendments.

One would permanently extend the current half-cent sales tax that generates revenue for highway projects. It is a temporary tax that is due to expire in 2023, unless Arkansas voters approve the ballot issue.

A second proposed amendment would change the current term limits provision in the state Constitution. It would impose a 12-year limit, but the limit would be for consecutive service and not for a lifetime. Thus, a legislator who served 12 years would have to leave office. But under the proposed amendment, the lawmaker could run again after sitting out for four years.

The third measure, if approved, would change the process for citizens’ groups to have measures placed on the November ballot. It would move up the deadline for submitting signatures to January 15. Currently, the deadline is in early July. 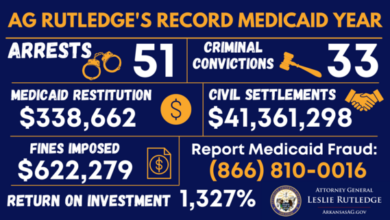