The mill now boasts more LEDs (light-emitting diodes) with the goal eventually to have all LED lighting. LEDs have longer lifespans and lower maintenance costs compared to the mill’s previous and existing metal halide and T5 fluorescent lighting.

The mill installed more than 200 LED fixtures, which involved more planning and work than simply replacing bulbs. The project team concentrated on areas of the mill that were dark at the floor level with high bay lighting. LEDs are much brighter than metal halides and fluorescents since they have a higher lumen/watt score. Upgrading the lighting in the darker areas enhanced the visibility.

The SWEPCO incentive will help cover some of the upfront costs of this project, which has an expected payback period of less than two years. Moving forward, the use of LED lights when compared to the use of older, inefficient lights will yield savings of approximately $82,000 a year or about $6,900 a month on Texarkana Aluminum’s SWEPCO bill. “SWEPCO is proud to help Texarkana Aluminum make this investment to save both energy and resources,” said SWEPCO Energy Efficiency & Consumer Program Coordinator Mike Nix. “We hope Texarkana Aluminum will be able to reinvest the money saved from this project into other areas of its business for continued success.”

This project is part of SWEPCO’s Commercial Standard Offer Program, which was developed under the guidance of the Public Utility Commission of Texas, to pay monetary incentives to commercial customers for new construction and retrofit installation of a wide range of measures that reduce demand and save energy. Incentives are based on deemed savings, or the verified demand and energy savings that occur at the customer’s site.

SWEPCO, an American Electric Power (AEP: NYSE) company, serves 536,000
customers in western Arkansas, northwest and central Louisiana, northeast Texas and the Texas Panhandle. SWEPCO’s headquarters are in Shreveport, La. News releases and other information about SWEPCO can be found at SWEPCO.com. Connect with us at Facebook.com/SWEPCO, Twitter.com/SWEPCOnews, Youtube.com/SWEPCOtv and SWEPCOConnections.com. 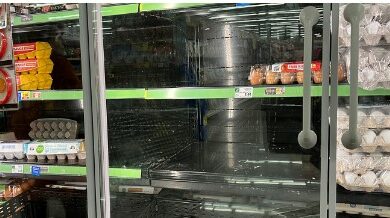 Price of eggs to eventually drop, but not to where it was in 2021, Arkansas poultry economist says