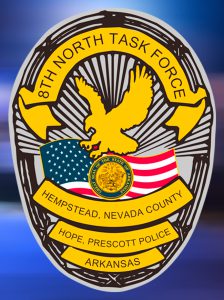 At 709 Harris, Sheriff Singleton reported a search resulted in seizure of an undisclosed amount of money, a film canister containing a crystal-like substance suspected to be methamphetamine, a glass pipe commonly used for smoking meth, two sets of digital scales, a surveillance system and a loaded Ruger.357 revolver which returned as stolen out of Hempstead County.

At 711 Harris, Sheriff Singleton reported a search resulted in the seizure of a brown wooden box containing what is believed to be methamphetamine, two clear bags believed to contain marijuana, one hypodermic needle, a white and brown pipe, a glass pipe commonly used for smoking meth, and undisclosed amount of cash, digital scales, a Marlin 12-guage shotgun and a Taurus LCP .380 handgun.

Felicia Henry, the property owner, was charged with maintaining a drug premises.

All three were transported to the Hempstead County Detention Facility and will be held until their first court appearance.