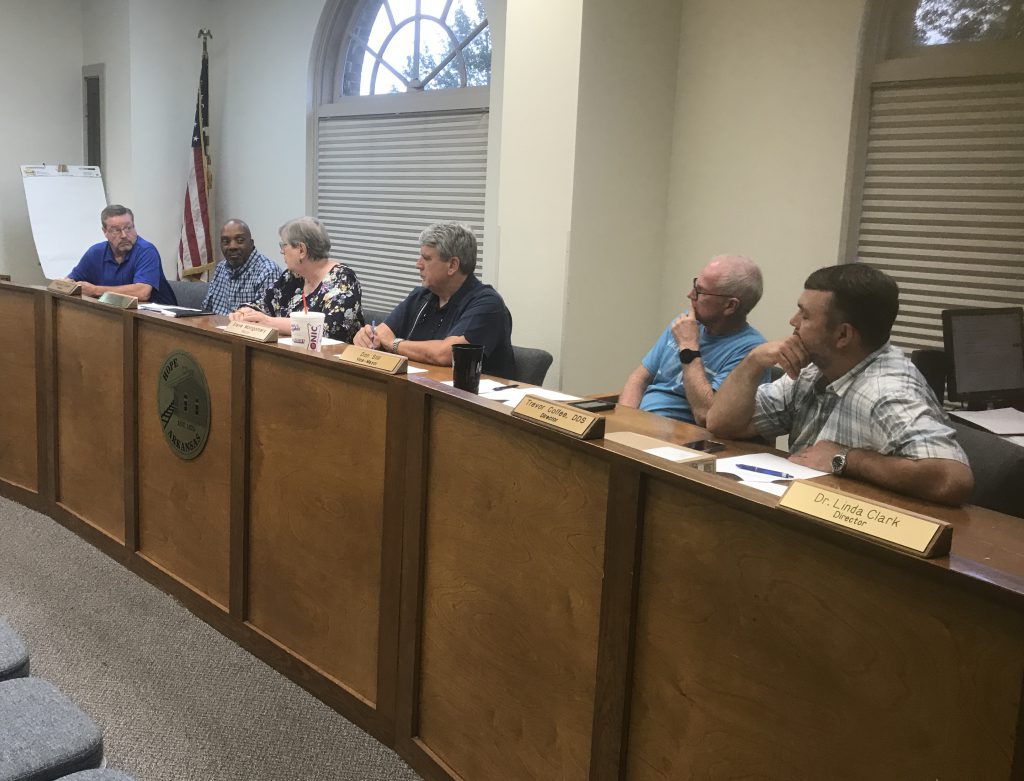 The City of Hope Board of Directors approved an ordinance that gives teeth to the Tourism Commission in collecting the Tourism Tax in the city during their first meeting of July. Video of the meeting can be viewed HERE and the meetings can be viewed live online here on swark.today.

Ordinance to Implement Enforcement and Collection for Tourism Tax
After putting the reading and voting of an ordinance to give the City of Hope Advertising & Tourism Commission the legal power to enforce the collection of the Tourism Tax for two weeks to allow for public comment, the Hope City Board of Directors took the issue back up during their July 2 meeting. Mayor Steve Montgomery, whose personal business is required to collect the tax and will be subject to the new ordinance, said he had surprising little input from citizens or his peers on the issue.

The 16-page ordinance was read out loud by City Attorney Joe Short before the board unanimously approved it. The ordinance will require businesses subject to the Tourism Tax to get a permit from the Tourism Commission for each of their business locations that are required to collect the sales tax. The permit will not cost any money but is intended to get the business on the books and show compliance. Businesses that do not get the permit will not be allowed to operate. As currently written, businesses must have their permit on display by December 1 of this year. Businesses that are delinquent or fail to pay the tax can have their permit revoked. If the permit is revoked, Short said, the city can force the business to close its doors.

The ordinance will give the Tourism Commission tools to enforce the collection of the tax and the payment of the tax to the city. Enforcement measures, which are set to go into effect on November 1 of this year, range from penalties for late payments to criminal prosecution for more extreme cases. The ordinance allows for businesses to potentially be audited up to once a year if the city deems it necessary. The city will likely bring in outside consultants with experience to perform the audits and the business will be required to give access to their financial information and records.

The ordinance was recommended for implementation because the Tourism Commission has had problems with some businesses which were required by the original ordinance implementing the tax. Some business reportedly failed to collect, collected but did not pay or paid the tax late.

City Attorney Joe Short said that they aren’t inventing the wheel with this ordinance. Short said that he and HPD Chief and Assistant City Manager JR Wilson looked into what is allowed by Arkansas law and has been done in other municipalities in the state.

Anyone interested in reading the ordinance can view it HERE.

Request to Change Name of Julia Dr. to Trinity Dr.
On June 17, 2019, the Hope Planning Commission considered a request by Mt. Kirby Investment to change the name of Julia Dr. to Trinity Dr. Julia Dr. connects N. Harvey Between Wendy’s and Chicken Express to Commerce Blvd. (Bypass). Mt. Kirby is currently constructing the Christus Trinity Clinic on the Julia Rd. and wan to change the name to coincide with the new clinic. The owner of the proper the road runs through is in agreement with the requested name change. The request was approved by the Planning Commission and brought before the Board for approval. The Board approved the name change unanimously.

HAPS School Request to Adopt Street
Students with HAPS participated in a community service project during the 2018-2019 school year to clean up trash on Grady St., which runs next to the school, between 6th St. and 16th St. HAPS requested to be allowed to adopt the section of street and do cleanup days at least once every three months on the street. The City of Hope will provide trash bags and traffic control during the clean ups to assist. The Board adopted and approved the request unanimously.

Sewer Connection Request for 23rd St. Residence
County resident Ann McWilliams requested city sewer connection to her property for a mobile home she intends to place for her elderly father to reside in on her property on 23rd St., outside of the city limits. City Manager Catherine Cook said that the city sewer system on the southeast end of the city was designed with expansion out into that area of the county in mind and the location could be connected to the sewer system without causing any issue. City Board member Don Still said he isn’t opposed to allowing it but thinks the city needs to be mindful of these kinds of requests and the potential of losing incentive for outlying areas to become part of the city to gain access to city services. The Board granted the request with a unanimous vote.

Sanders signs proclamation to declare a state of emergency in Arkansas