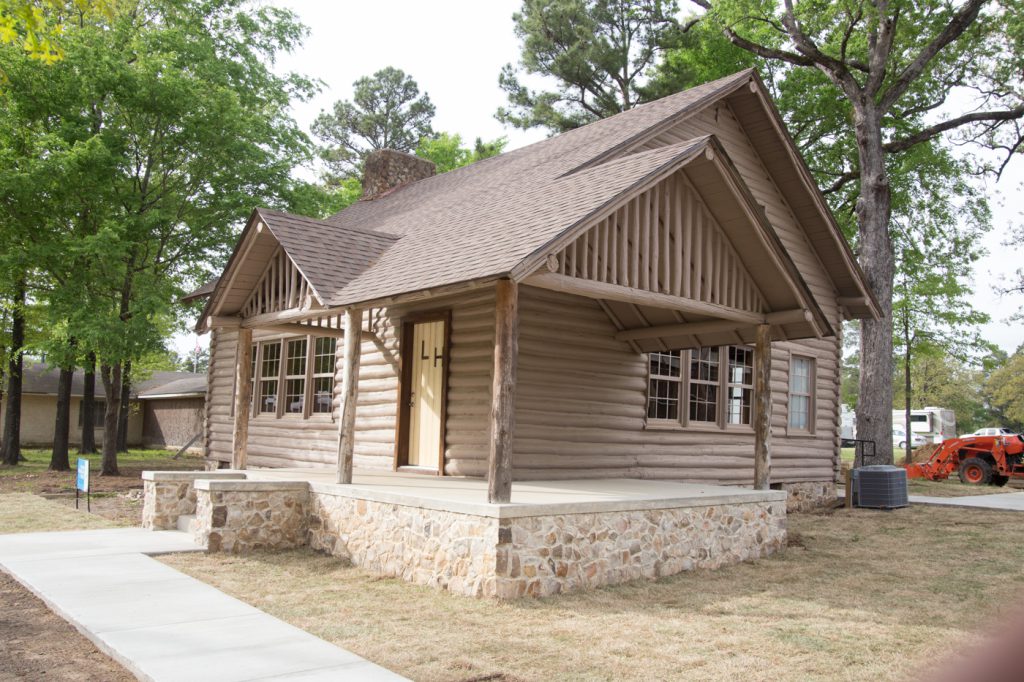 The Hope Advertising and Tourist Promotion Commission held their monthly meeting Thursday in the recently renovated Log Cabin in Fair Park, where Girl Scouts had their meetings for decades. There are a few small details remaining for the cabin to be finished but the building will now be available to rent for gatherings such as family reunions of 30 people or fewer. The building will be available for a $75 fee.

The Tourism Commission had a lot to discuss in their April meeting, a couple of items which required the input of City of Hope Attorney Joe Short.

The biggest issue which Short advised the Commission on was how to give them some teeth when it comes to the collection of the 2% “Hamburger Tax”, which certain local businesses are supposed to collect.

Short told the Tourism Commission that currently, there are no statutes in place that gives the commission the ability to legally pursue those who either refuse to collect, fail to pay, deny access to audits, falsely report or don’t pay all they collected to the commission. The Tourism Tax takes in over $500,000 each year which the Tourism Commission uses for promoting the area and projects to increase recreational options in Hope. In order to give the commission authority, Short said, statutes would have to be passed by the Hope City Board of Directors. Depending on the direction they choose to take, this would potentially give the commission the authority to bring in forensic accountants to audit the books of businesses required to collect the tax and to take action against those that fail to comply that could result in felony charges and liens against the offender’s assets, including personal property and bank accounts.

Short offered some options to the commission and examples of what other cities do which are allowable under Arkansas State Law. Short advised the commission that once a decision is made and an ordinance is passed by the Board, it would be up to the Commission to pursue collection and enforcement and would allow it to sue for owed tax revenue, as well as open the commission up to being sued. Short said that the enforcement would only be applicable to any taxes owed after the statutes are passed.

Paul Henley shared some options with the Commission for new playgrounds which that are planned to be installed at Fair Park and Northside Park. The playgrounds are designed for kids 5-12 years of age and will be installed by the manufacturer. The Commission received a $100,000 grant for the project. In Northside Park, they are planning on installing the playground in the area between the bathrooms and the pavilion. At Fair Park, they are planning on installing it where the old elephant slide is located near the swimming pool. Henley said the elephant slide will remain and be incorporated into the new playground. The locations were chosen to make sure families would have convenient access to restrooms. The playgrounds are expected to be installed by late August. Henley said that there may be time for a third grant depending on how things progress. Henley also presented an idea for a potential interactive playground for the Pavilion Park downtown for the Commission to consider in the future.

Henley advised the Commission that there will be a special event at the Hope Airport Museum on April 25th while the Arkansas Parks and Tourism FAM tour is scheduled to be in the area. The 28 Arkansas Parks and Tourism VIC employees are expected to be part of the tour and the Tourism Commission will be providing 15 hotel rooms and one meal for the group while they are in town.

Train Day is coming up on May 4 and the Commission expect it to be bigger and better this year. Sharon Caldwell told the Commission this year’s Train Day will include a 5K Run, Rib Cook-Off, Vendors, Kid’s Train, kids’ activities with students from HAPS, a Car Show, Petting Zoo, and more. The event starts at 9 a.m. and will be concluded with a concert featuring South Down Main with the Nighthawk Band opening. There event is free to the public. Caldwell said Tyson has donated 40 racks of ribs for the cook-off so there will be plenty to try out.

Summer Powell, Assistant Recreation Director, spoke to the Commission about the Youth Softball Tournaments that have returned to Hope. The first was the same weekend as the Mud National and had 25 teams from all over attend. Powell said that the coaches and visitors have had high praise for the facilities where the games are hosted and the tournaments. A tournament that was scheduled for this weekend has been rescheduled to May 11 due to weather. There will be a tournament for kids 8 and under and one for kids 12 and under. Another tournament is scheduled for June 29 and will be for teams 14 and under and 16 and under.