By Rick Kennedy, managing editor
The anticipated unveil Tuesday night of the results from a nearly month long survey administered the Arkansas Economic Development Institute (AEDI) was a mixed bag, bringing as many questions as answers, and an unbalanced participation in the survey itself was subject of much discussion.
And, in many regards, the visible participation at Tuesday’s meeting, an estimated 69 persons in attendance by the counts of two of the AEDI officials that were at Hempstead Hall, almost mimicked those of the survey completed surveys themselves, mostly older, mostly white, and mostly higher incomes represented.
AEDI Deputy Director Randy Wright oversaw the meeting, while Community Development Specialist Mike Gerfen presented the survey results.
While both Gerfen, and later, AEDI’s April Campbell, confirmed that over 1,000 surveys had been filled out — a publicly stated goal of both local advocates Hope Mayor Steve Montgomery and Hempstead EDC Director Steve Harris — Gerfen, however, announced that only 698 surveys were finished, and therefore, included in the statistical analysis.
When asked to clarify about the surveys that were counted, Gerfen said “We only included those that were fully completed.”
Wright said both during the meeting, and again afterwards, that he felt Hempstead County and Hope as a whole were under represented, which concerned him.
Wright noted that 67-percent of the survey’s participants were from Hope.
In the main presentation, Gerfen noted that 77-percent of the survey respondents were above the age of 35; 76-percent of the survey were white, while 15-percent was African Americans and six-percent were Hispanics.
Gerfen also said that 30-percent of the survey response was from people making $100,000 or more.
For perspective, Gerfen said “As you may well know, the percentage of population in the City of Hope is 35-percent white, 43-percent African American and 21-percent Hispanic. You are a majority-minority populated community, and yet, 76-percent of those who participated were white.”
On specific questions from the survey, Gerfen opened up, saying “Does everybody remember the question about city government? The question was ‘Do you trust city government to do the right thing?’ Does everybody remember that question? Yeah, I bet you all wrote specific responses to that, too. We have a mini novel in back of the survey.”
Gerfen went on to then say, “78-percent of the African Americans said ‘Almost Never’ trust city government; 66-percent of Hispanics said ‘Almost Never’ and 50-percent of whites in the community said ‘Almost Never’ so I would say that there was a fairly significant negative response as it relates to city government.”
On the local economy, Gerfen said that “Everyone’s similar on the overall rating of the economy — pretty bad.”
On the quality of public schools, Gerfen said that 60-percent of whites answered “Very Bad,” while 31-percent of African Americans and 58-percent of Hispanics, also answered “Very Bad.”
But, in a juxtaposition, Gerfen also said that all races said the quality of local colleges and universities was good.
And, he said, “All races chose ‘Average’ or better on the question of “I am proud to say I live in my community.”
The survey summary analysis as presented by Gerfen is presented with this story below. SWARK Today will do a further local reaction in a follow-up report. The local Steering Committee and AEDI officials will meet again next week 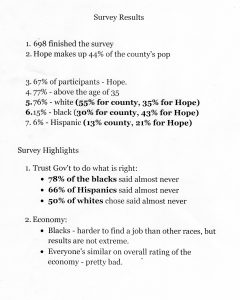 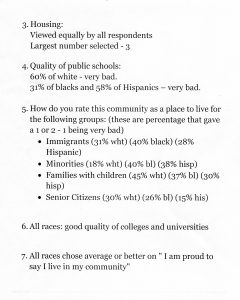