Nate Allen Sports
FAYETTEVILLE – Daniel Gafford and Isaiah Joe combined for 46 Arkansas points but it took Keyshawn Embery-Simpson, and Mason Jones scoring the last five between Jalen Harris taking a charge for the Razorbacks to overcome last-place Vanderbilt, 69-66 in Tuesday night’s SEC game at Walton Arena.
The Razorbacks lost a 10-point lead on an 11-0 Vanderbilt run during the second half and trailed, 66-64 when Commodores senior Joe Toye drilled a three from the right corner with 39 seconds left.
Freshman reserve guard Embery-Simpson nailed his go ahead trey 67-66 off a pass from double-teamed center Gafford and the shot clock winding with 14 seconds left on the game clock.
“The shot clock was going down and I was like, ‘Hey, we gotta get it up,” Embery-Simpson said of the laborious possession intent to find Gafford just too smothered by Commodores. “I was confident in me shooting it. I felt it coming off my hands and was like, ‘Oh yeah, that’s gotta be good.”
Arkansas Coach Mike Anderson praised his star big man and his freshman reserve guard for their big assist and shot.
“I thought Dan did a good job of getting through that double-team because they had him sandwiched in there,” Anderson said. “As a matter of fact the shot came to Keyshawn earlier (during that possession) and he turned it down. And Dan got it to him and he was wide open. That’s just trusting your teammates. Keyshawn’s shot was big.”
Harris took charge with eight seconds left, voiding Vandy’s go-ahead try absorbing the charge with eight seconds left fouling out Vandy star guard Saben Lee.
Toye fouled fouled Jones with seven seconds left. The sophomore guard whose late basket upset No. 19 LSU 90-89 last Saturday in Baton Rouge, hit both free throws for Arkansas’ 69-66 lead holding up when Vandy’s Matt Ryan’s long trey tie landed awry in the final second.
Anderson is not inclined to foul up by three in the waning seconds and he explained why.
“Sometimes you can outcoach yourself,” Anderson said, citing Arkansas’ recent rebounding struggles. “So I said, ‘We’re going to guard these guys.’ We had no timeouts, so we were just going to guard them. If he makes it, he makes it. But just think about it … Can you imagine getting off the free throw line they get it and they kick it out and a guy makes a four-point play?”
Obviously the point was moot.
Anderson’s Razorbacks, on a 3-game SEC winning streak, improve to 14-8 overall, 5-4 in the SEC.
Coach Bryce Drew’s Commodores belying their record taking Arkansas to the wire, drop to 9-13, 0-9.
“Vanderbilt and Coach Drew came in and played their tales off and had a great first half,” Anderson said. “Defensively we couldn’t do anything with them in the first half. In the second half we were a lot better. We had a nice little rhythm in the game with our defense but everyone is good in the SEC. Vanderbilt (taking nationally No. 1 Tennessee to overtime on Jan. 23) is a very talented team.”
The Commodores behind Toye, 18 points with 4 of 6 treys, came back until Harris took the final of several charges cashed by Razorbacks Gabe Osabuohien and Joe.
Sophomore center Gafford led Arkansas with a game high 28 points, including 10 of 12 free throws, and nine rebounds.
Freshman guard Joe of Fort Smith Northside scored 18 including 6 of 10 treys.
Toye’s 18 points off the bench led while starting Vandy center Simisola Shittu scored 12.
Vandy best players Lee, 12 points, and Aaron Nesmith, eight points, were both hampered by foul trouble.
“We got some of their guys in foul trouble in the first half,” Anderson said. “And that was big.”
Arkansas jumped to a 6-0 a game-opening lead on threes by Joe and Mason Jones then seemed to run in mud amid a morass of turnovers and missed shots.
The Commodores sailed through the Arkansas malaise to peak a 28-18 lead including Arkansas guard Embery-Simpson apparently grazing Vandy’s Ryan on a missed 3-pointer.
Ryan sank all three gift threes just before Aaron Nesmith scored inside for Vandy’s 28-18 lead with 3:54 left in the half.
Starting with two Gafford free throws at 3:45 of his 8 of 9 first-half freebies Joe trey from the left corner off break initiated by point guard Jalen Harris at
2:51, the remainder of the half mostly belonged to Arkansas.
The last two of Joes 5 of 8 first-half threes pulled Arkansas from down down four to down one head.ing into the intermission locker room down, 35-34.
Joe, 15, and Gafford, 12, accounted for 27 of Arkansas 34 first-half points.
Vandy spread its first-half offense with with five Commodores scoring from five points to Nesmith’s eight.
Arkansas freshman backup point Desi Sills, injuring his chest during crashing into the basket support at LSU, injured his wrist absorbing a hard foul during Tuesday’s first half.
Sills did return during the second half and contributed two free throws and three assists.
The Razorbacks appeared to have the game in hand when a Reggie Chaney dunk off a Gafford feed put them up 56-46 at 10:46 and about to run away with it.
Back sailed the Commodores behind behind Toye until Embery-Simpson, Harris, and Jones took over those final 14 seconds.

Vanderbilt takes 2 of 3 against Hogs 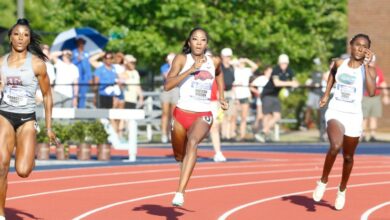 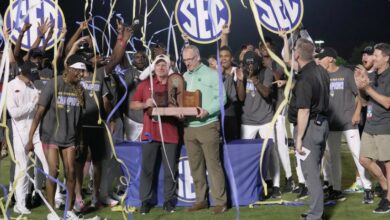